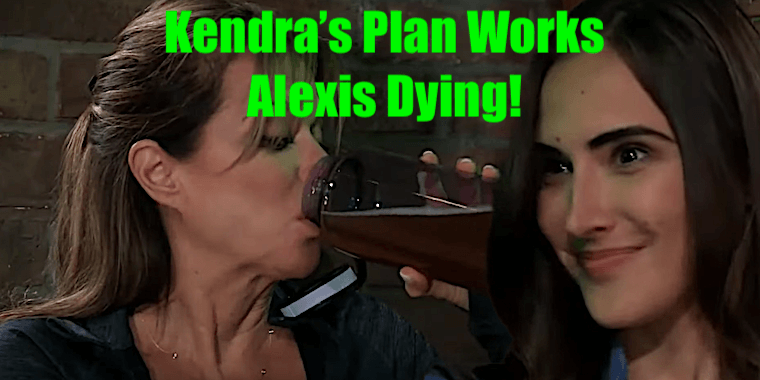 ‘General Hospital’ (GH) Spoilers for October 30th 2019 indicate that Hayden Barnes (Rebecca Budig) and Dr. Finn Hamilton (Michael Easton) will finally get together to discuss their little girl, Violet Finn (Jophielle Love). Finn is still trying to comprehend that the little girl that he previously thought was dead is actually alive and well but Hayden will propose something he hadn’t actually considered yet, and that is, if he wants to be a part of his little girl’s life.

Josslyn Jacks (Eden McCoy) will have a meltdown over a missing object. She will search and search for it and finally she’ll realize that it’s probably gone for good. What could it be? Perhaps its the lock that she and Oscar put on the bridge from before, or maybe it’s the compass that he gave her, or maybe it’s that necklace that was his first gift to her oh so long ago.

But it could also be the necklace that Jasper Jacks (Ingo Rademacher) gave her for little Donna Corinthos. It was like the one that Lady Jane gave to Joss ever so long ago and that is definitely something else that would cause Joss to freak out. Still, mom Carly Corinthos (Laura Wright) and Jason Morgan (Steve Burton) will do their best to help Joss find this item so maybe, just maybe, all hope is not lost with all three of them on the case.

Looks like Alexis Davis (Nancy Lee Grahn) will have a nice, long, scary nap, one that daughter Molly Lansing (Hailley Pullos) can’t seem to wake her up from! Yike! She’ll scream and shout for her Mom but it’ll take Alexis ages to hear her. When she does awaken, they will both realize that whatever it is, Alexis is sick. She will caution Molly to leave because she thinks she’s coming down with the flu.

However we all know that it’s not the flu, but a case of poisoned dietary supplement that’s causing her illness. Alexis won’t realize that, though. Right now she thinks that personal trainer Kendra Lennon (Michelle Agyris) is just trying to help, it’ll take her awhile to figure out that Kendra actually wants her dead.

Port Charles’ High School dance will be held aboard the Haunted Star Lulu Spencer (Emme Rylan) and Dustin Phillips (Mark Lawson) will be serving as chaperones for the event. Trina Robinson (Sydney Mikayla) will have to work extra hard to get Cameron Webber (WIlliam Lipton) to even show up, but she’ll ultimately succeed in getting him there. Cam needs some fun in his life and this is the perfect opportunity to do so. But he better enjoy it while it lasts, because it looks like before the week is out he’ll be in trouble again.

Meanwhile, Ava Jerome (Maura West) will be stalked at the Metro Court Halloween party by a masked man, which will make her feel like she’s being watched – again. She’ll also bump into another partygoer but overall she’ll have some really bad vibes about this whole situation. Is the guy stalking her Nikolas Cassadine (last played by Nick Stabile)? We’ll just have to wait and see on that one.

Jordan Ashford (Briana Nicole Henry) will be getting grilled by son TJ Ashford (Tajh Bellow), Curtis Ashford (Donnell Turner) will overhear. It’s not know what TJ’s so curious about yet though, it could be about Stella Henry’s (Vernee Watson) trip, or maybe its about their financial situation and his stint in grad school which is even more likely. Either way, TJ is hoping to get to the bottom of things.

‘General Hospital’ Spoilers: Valenin gets angry and so does Nina

He’s not the only one! Valentin Cassadine (James Patrick Stuart) will be trying to get to the bottom of thing as well and will ream Laura Webber (Genie Francis) and Jax for focusing so much on Helena Cassadine’s (Constance Towers) portrait. He is highly suspicious of them but they’ll do their best to throw him off the scent.

And speaking of Valentin, his lady love Nina Reeves (Cynthia Watros) will bump into Sasha Gilmore (Sofia Mattson) and rail her for all she’s worth, holding her personally responsible for all the problems she’s caused. Michael Corinthos (Chad Duell) may have to jump in and defend her but in the end there’s only so much he can do, considering she’s stilli covering for Valentin! How will this end? Stay tuned! For any other soap opera and entertainment news, please visit Daily Soap Dish.