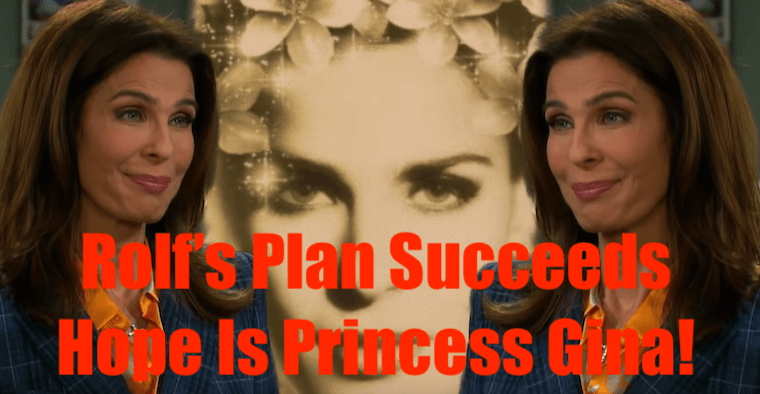 ‘Days of Our Lives’ Spoilers: Eli catches Hope sleeping in an odd place and chalks it up to stress

‘Days of Our Lives’ (DOOL) Spoilers for Thursday, October 10th, 2019 indicate that Dr. Wilhelm Rolf (William Utay) has put part one of his plan in place to resurrect ‘Princess Gina’ by injecting Hope Brady (Kristian Alfonso) with a loaded syringe and it looks like this part was a success. He’ll be seeing some results and he’ll be pretty pleased wit the outcome and proud of himself. Looks like Eli Grant (Lamon Archey) will be the one to find a sedated Hope taking a nap.

He’ll shrug it off to all the things related to Julie Williams (Susan Seaforth Hayes) going on recently, and he may even admit that he hasn’t been sleeping all that well either. The weird place that Eli finds Hope in won’t be a surprise at first because grief does strange things to people but later, her behavior will become more erratic and ultimately she will believe that she’s actually Princess Gina. Dr. Rolf’s motives will be quite the wild ride, that’s for sure.

‘Days of Our Lives’ Spoilers: Victor and Brady quarrel over Kristen

Victor Kiriakis (John Aniston) will have some choice words for Brady Black (Eric Martsolf), he hit the roof when he found out that Kristen was pregnant but now that he knows that she’s moving in? He’ll hit the stratosphere! Victor’s going to give Brady a hard time, and may even refuse to let her move in at first because it’s his house after all. But sooner or later, he’ll probably relent. This may be because he has a big heart and there’s a child involved but it also may be because he just doesn’t want to hear about it from Brady anymore. There’s only so much a former mob boss can take before he cracks.

‘Days of Our Lives’ Spoilers: Will, Sonny, and Bill all plead with Gabi for the gift of life

Will Horton (Chandlery Massey) and Sonny Kiriakis (Freddie Smith) will reach out to Gabi Hernandez (Camila Banus) and tell her that she’s got their support, but they’ll also try to persuade her to give Stefan’s heart to Julie as per Eli’s request but for now, Gabi will stand by her man and stand her ground. Ain’t nobody getting’ that heart right now.

These pleas will later be followed up by one from Doug Williams (Bill Hayes) as well as brother Rafe Hernandez (Galen Gering), they’ll try to reason with her. Gabi will tll them that she needs a few minutes alone to really process this decision and it’ll break her heart to have to pull the plug on Stefan, but she’ll start to see reason soon enough and start realizing that she has to say goodbye soon. But will she ultimately give Stefan’s heart away? Stay tuned!

‘Bold and the Beautiful’ Spoilers Update: Little Will Overjoyed Mom Will Live, Bill Besides Himself – Katie Logan Gets Kidney Transplant

NBC ‘Days of Our Lives’ Spoilers: All About Kristen DiMera’s Zombie-Like…