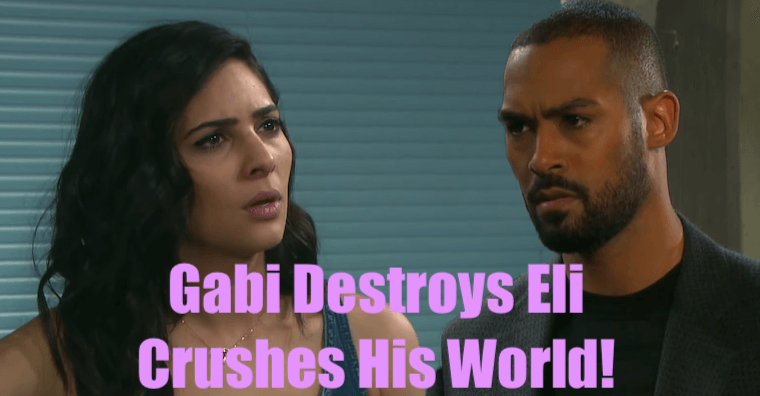 ‘Days of Our Lives’ (DOOL) spoilers reveals that Gabi DiMera (Camila Banus) doesn’t take well to Eli Grant (Lamon Archey) request, Ben Weston (Robert Scott Wilson) makes a request of his own as Ciara Brady (Victoria Konefal) faces off with Jordan Ridgeway (Chrishell Hartley). Also, Rafe Hernandez (Galen Gering) has concerns, and Victor Kiriakis (John Aniston) has another unwelcome guest.  If you missed it, let’s get to your ‘Days of Our Lives’ recap.

‘Days of Our Lives’ spoilers: Get rid of her

Ben is desperate after Ciara nearly got hit by that car. So much so, he’d visited Victor and demanded help. Victor thinks he’s quite bold to barge in claiming he’s owed anything. Ben reminds Victor that after what he tried to do, something Ben’s kept quiet about, he does. His favor is simple. The police aren’t doing anything, because they’re not finding evidence, but he is sure Jordan tried to kill Ciara. Victor has to make Jordan disappear.

When Victor Kiriakis asks if a supposedly-reformed killer can live with his sister’s blood on his hand, Ben balks. Victor is too extreme. All Ben Weston wanted was for her to be sent away to a facility far away. Somewhere she can get the help she needs. Victor reminds Ben that sometimes things go wrong, but it looks like the plan is a go. Victor later calls someone to set things up, ordering them to wait for his say-so to proceed.

Meanwhile, Ciara encounters Jordan in a hospital elevator. She wants to know what Jordan is doing here. Jordan explains she’s interviewing for her old job, then stops the elevator. Ciara is, understandably nervous. Jordan just naturally looks creepy, but with her starting in on the “Ben is evil” talk again, she starts taking on a whole new level of creepy. Ciara tries to get the elevator to open, but it just keeps them stuck longer. Jordan insists that she is not a threat at all, and one day, Ciara will wise up to the kind of man Ben is.

‘Days of Our Lives’ spoilers: Doubts

Rafe is looking over the crime scene again, hoping to find something that will answer the question: who tried to run down Ciara? When Lani sees him doing this, she asks if he believes Jordan is guilty. He points out there isn’t any evidence against her, but he does have his doubts. Still, he thinks that the doctors know what they’re doing and wouldn’t release a dangerous woman. Lani wonders if they released her too soon. She also wonders if Rafe is having seconds thoughts about this whole “keep an eye on Jordan” thing. He tells her that if they were willing to release her to be with her son, he’s no one to stand in the way of that reunion.

‘Days of Our Lives’ spoilers: The request

At the hospital, Eli Grant (Lamon Archey) has decided to go for it. After giving Gabi his condolences and apologizing for the timing, he says it’s extremely important that they talk. Gabi goes along for now. He explains that he feels bad about this, but Julie Williams (Susan Seaforth Hayes) is running out of time. The only spark of hope they have is getting Stefan DiMera’s (Brandon Barash) heart.

Gabi takes this about as well as one would imagine. Even all Eli’s pep-talk material about how it will be like a piece of Stefan lives on that can help heal Gabi, she’s not hearing this. She gets even angrier when he all but implies this would be making up for what happened with Julie before. Wow. We can’t. He’s really stumbling over this whole thing all wrong, and Gabi DiMera was obviously in no condition to hear it. She goes off on him for the way they treated her after Julie’s heart attack, adding that he had said she was never to get near his family again. Now he wants her to hand over Stefan’s heart?

To someone who was horrible to her? Gabi doesn’t think so. Julie has no prayer of getting the donation, and Gabi hopes she dies. Okay, a bit extreme, Gabi, but somewhat understandable under the circumstances. Kudos to Eli for having the stones to even think about asking after how things went down, but sorry… it was a pretty classless move. For a good cause, to be sure, but still… he was never going to win her over with that sales pitch.

Also today, Brady Black (Eric Martsolf) is still unhappy with the idea of letting Wilhelm Rolf (William Utay) anywhere near the baby. Dr. Rolf is unphased by the “over my dead body” thing, and so is Kristen DiMera (Stacy Haiduk). She thinks that if the father doesn’t want to be by her side constantly through this very high-risk pregnancy—one only possible because of Rolf—then Rolf will do. He is, after all, a trusted ally. For his part, he is content to leave and let this unhappy couple battle it out.

While they argue, Kristen gets dizzy. Brady rushes to her aid, but almost as quickly wonders if this is a trick. Kristen is offended. She thinks he should know how much being pregnant means to her. She wouldn’t risk her child by falling on purpose to get sympathy.

Obviously appeased on some level, Brady later tells Victor he has some more bad news. Victor can’t imagine what would be worse than him having a baby with Kristen, but Brady begs to differ. He’s invited Kristen to move in.

Finally, Hope Brady (Kristian Alfonso) is in the chapel praying. Dr. Rofl sees her and offers a huge favor. He’s willing to give Julie his magic serum. It won’t heal her heart, but he’s confident that it will extend her life so the chances of getting an organ donation improve. Hope is reluctant, and we don’t blame her. As he talks, he is sounding a bit out there. We have to give special props, though, to something almost any ‘80s music lover will appreciate… his delivery of the word “science” when he asks what Hope is willing to put trust in right now—that, or her faith? She chooses science, and it’s a horrible decision. Instead of loading the syringe with the serum for Julie, he has put something else in there. Something he injects Hope with.