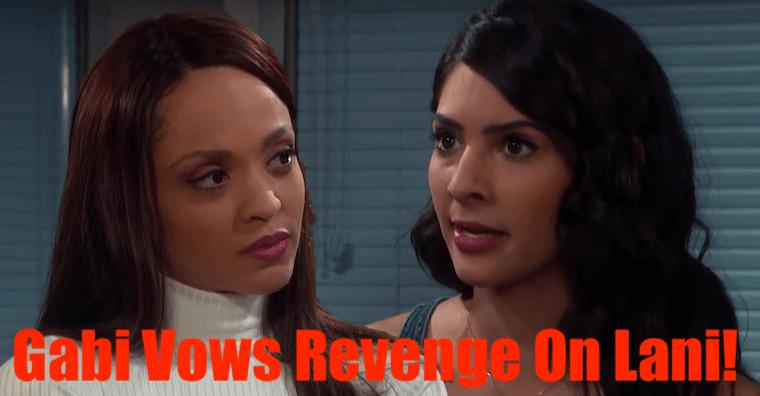 ‘Days of Our Lives’ (DOOL) spoilers have Lani Price (Sal Stowers) is in an uncomfortable position, Julie Williams (Susan Seaforth Hayes) has some hope, Vivian Alamain (Robin Strasser) gives some advice. We also have a very presumptuous Kayla Brady (Mary Beth Evans). If you missed it, let’s get to the ‘Days of Our Lives’ recap.

Eve Donovan (Kassie DePaiva) is over Salem and all the pain it’s brought. As she talks to a picture of her daughter, she decides she’s out of here. She is on her way to a new life when she comes across a crying woman. It turns out to be Vivian, who is reeling from the bad news. She’d snuck into the hospital and overheard Kayla saying Stefan DiMera (Brandon Barash) is brain dead.

Eve, knowing her pain offers her sympathies and shares her own experience. As they talk, Eve is surprised to learn that Vivian shot Kate DiMera (Lauren Koslow) and is on the run. After a moment, she decides she wants to go with Vivian. This town holds nothing for her, and Vivian won’t have to be alone. Vivian thinks she needs to grow a spine and stick it out. If she weren’t wanted by the Salem PD, she’d be staying to get revenge on Lani and Gabi DiMera (Camila Banus).

She urges Eve to stay and stand up for herself. Dear lord. It’s tweedled dumb leading tweedled dumber. Somehow, we don’t think Eve should be taking advice from a woman who thought that Lani should’ve just known the gun was only meant to scare her. What do you think a person is going to do when you’re pointing a gun at them and refuse to drop the weapon? Especially when you move like you’re about to fire?

As for other issues, Doug Williams (Bill Hayes) is crying over Julie with Hope Brady (Kristian Alfonso) and Eli Grant (Lamon Archey) arrive. Hope joins in and Eli is looking upset, until he decides to do the smart thing and check for a pulse. How do these people function?

Seeing there is still hope, they want to take Julie back to the hospital, but Doug says no. He made a promise to her, the last promise, and he intends to follow her wishes. Hope and Eli tearfully beg him to reconsider, and he is eventually worn down.

The news when they get there isn’t good, though. She’s now in a coma and has very little chance of recovery unless she gets that miracle transplant.

‘Days of Our Lives’ spoilers: Lawsuits and second opinions

Also at the hospital is Gabi Hernandez. When Kayla breaks the news about him being brain dead, she is in total denial. She goes on about Kayla’s mistake with Kate, and we honestly can’t blame Gabi for not taking Kayla at her word, despite Kayla pointing out all the reasons why this is different. Gabi is so upset, she goes off on Kayla, accusing her of malpractice and promising a lawsuit against her. She intends to take Stefan for a second opinion.

After chasing Kayla out of the room, she tells Stefan that he owes her that honeymoon anywhere she wants to go. She’s planning to hold him to that. She urges him to fight and come back, while also promising that she’s going to get every expert she can find on his case.

‘Days of Our Lives’ spoilers: Get out of my face

While Gabi is busy with tending to Stefan, Lani is getting the news that Stefan is brain dead. She is completely devastated by the news. She blames herself, and rushes off to find him and Gabi, despite Eli’s insistence that she did nothing wrong.

Inside the room, Gabi immediately goes off on Lani. She also accuses Lani of having bad intentions and swears she is going to sue her and the Salem PD for what happened. Lani apologizes for the incident and explains what happened, but Gabi isn’t accepting it anymore than Lani accepted Gabi’s explanation when Julie had her heart attack. Can we say “karma”? It’s sweet, and we’re getting too much glee in seeing Lani get knocked down a peg after the way she was behaving.

Despite Gabi saying she wants nothing to do with her and wants her gone, Lani sticks around and tries to offer her sympathies again. Gabi freaks out and starts yelling at her, which is about the time Eli catches up with her. He ends up leading Lani Price out of the room as Gabi turns her attention back to her man.

‘Days of Our Lives’ spoilers: Predictable

Before Julie gets back to hospital, Jennifer Horton (Melissa Horton) is waiting in Julie’s room with Jack Deveraux (Matthew Ashford). He offers to call Eli while she calls Hope, but she insists on him leaving her alone to do it herself. She only gets a voicemail, which she hopes means that they found Julie safe and are bringing her back.

When Jack returns, he guesses that she was being typical stubborn Jennifer, wanting to keep things to herself. She wonders if she’s that predictable, and he basically affirms. He reminds her that they’re in this together, against the world.

‘Days of Our Lives’ spoilers: Presumptuous, much?

In some WTH news, Kayla and the family are outside Julie’s room when Kayla pulls Hope aside. She asks if she heard about Stefan. Hope’s sad to learn the situation. Then, Kayla does something that we can’t even wrap our heads around. She tells Hope that since Stefan is now brain dead, Julie could get a heart.

Wow. We can’t. After the way Gabi was going on, she shouldn’t even have had the nerve to bring it up. To her credit, she admits that it’s not a sure thing, as they don’t know Stefan DiMera’s end-of-life wishes and all. That’s why she didn’t want to say anything to the others just yet. Um, considering Gabi threatened to sue her (the second lawsuit threat lately, by the way), and vowed to get other opinions, that was a good idea. She shouldn’t have told Hope, either.

When the rest of them hear about this, their reactions are almost giddy. It seems kind of goulish, and we are seriously upset with the writers right now. #Stabi, we hardly knew ye.