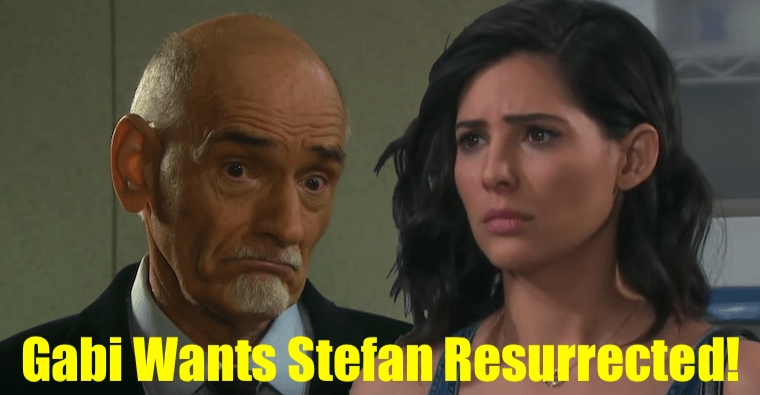 ‘Days of Our Lives’ Spoilers: You know its bad when even Dr. Rolf can’t save him

‘Days of Our Lives’ Spoilers for Tuesday, October 8th 2019 indicate that Gabi Hernandez (Camila Banus) will demand a favor out of Dr. Wilhelm Rolf (William Utay), since he’s going around resurrecting every dead person in Salem, she will demand that he save Stefan DiMera (Brandon Barash) as well.

For a split second we might have hope that all of this will turn out right and that he’ll be as good as new, but as it turns out, Dr. Rolf isn’t the be all and end all of everything and he can’t just undo the extensive damage that the bullet has done to Stefan. It looks like, for right now at least, Stefan will meet his maker and there’s nothing that anyone can do about it.

‘Days of Our Lives’ Spoilers: Julie gets Stefan’s heart but not without a fight

Poor Gabi is really struggling with Stefan’s fate. She doesn’t want to believe that there is complete lack of brain activity but Rafe Hernandez (Galen Gering) will step in and try to make her see reason, that there is nothing more that can be done for Stefan and that she truly needs to let go of him. Eli Grant (Lamon Archey) will then step in and beg Gabi to donate Stefan’s heart to Julie Williams (Susan Seaforth Hayes) but Gabi will put up a fight about that, as we all know she cannot stand Julie and the feeling is mutual so you can expect to see some major outage on Gabi’s part.

‘Days of Our Lives’ Spoilers: Brady and Victor have it out

Brady Black (Eric Martsolf) will have the extra pleasant job of informing Victor Kiriakis (John Anniston) that Kristen DiMera (Stacey Haiduk) is pregnant. If you think Victor’s going to be calm about this, then obviously, you haven’t been paying attention. Victor is going to hit the roof! No matter what Victor says though, or just how problematic Kristen is, Brady will insist that it’s his responsibility to stand up as a father and be there for his son or daughter. After all, no child asks to be born to Kristen DiMera!

‘Days of Our Lives’ Spoilers: Jordan and Kristen make friends

Speaking Kristen, looks like she will be making new friends with deranged psychopath Jordan Ridgeway (Chrishell Hartley) but obviously she won’t seem that insane to her at first. They’ll find some common ground and bond over that, and who knows, with their level of scheming and conniving, Salem might just have its greatest two villains ever teaming up together. Poor Ben Weston (Robert Scott Wilson) will continue to worry and fret about the safety of girlfriend Ciara Brady (Victoria Konefal) after he has a horrific dream in which Jordan actually murdered her, prompting him to take some drastic measures later on in the week. What will those measures be? Stay tuned!