‘Days of Our Lives’ Spoilers: Ben Returns To Murderous Ways! 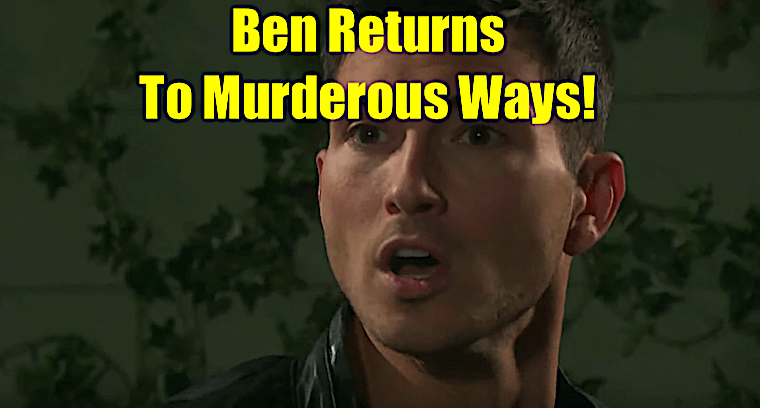 ‘Days of Our Lives’ Spoilers: Ben Returns To Murderous Ways, Puts the Hit On Jordan – Will Victor Give the Murder Order?

Ben wakes from a nightmare of Rafe Hernandez (Galen Gering) telling him that Jordan’s been arrested and Ciara Brady (Victoria Konefal) is dead.

He wakes in a panic, but is relieved when he finds Ciara is here and safe. She asks if he’s okay, but he doesn’t want to talk about his nightmare. They do need to talk about something, as Ciara has news for him. She tells him about Stefan DiMera (Brandon Barash) being brain dead. It horrifies him, as Stefan was the only one in that town besides Gabi to give him a second chance. He hopes that at the very least, his death can save Julie so it won’t be in vain.

‘Days of Our Lives’ spoilers: Confrontation

When Ciara leaves to check on Julie, Ben decides it’s time to deal with his sister. He accuses her of trying to kill Ciara, which Jordan completely denies. She insists that he is the real threat to Ciara. She thinks that bad things will keep happening to her, so long as Ciara is by his side. Unfortunately, Ciara might not be so lucky next time. This makes Ben angry, and he tells Jordan she better not lay a finger on Ciara, or else. She thinks that for a supposedly reformed killer, he’s making a lot of threats. He later goes to Victor and says he owes Ben a favor.

‘Days of Our Lives’ spoilers: Suspicions

Also today, Rafe Hernandez is overheard on the phone with the Salem PD by Jordan. He had asked if there was anything tying Jordan to the attempt on Ciara. Apparently, there’s not. Jordan confronts Rafe about what she heard and asks if he really thinks she did it. He says that she told him she didn’t, so he believes her.

‘Days of Our Lives’ spoilers: Near confession

Jordan Ridgeway leaves with little David to take a walk. She finds a spot to sit near the crime scene and is beyond creepy. She says that they need to be careful here, then starts talking about how she’s suspected of trying to hurt Ciara. She asks the baby if she can tell him a secret.

Kristen happens upon her and says she loves secrets. The conversation turns to the Ciara attempt, and how people think she did it. Kristen asks if she did. Jordan is a bit upset about that, but Kristen promises no judgement. It looks like we might be this close to a confession, but they don’t get that far. Dr. Rolf comes along and asks to speak with Kristen right away. Kristen agrees, but tells Jordan that they should talk later. She believes they have a lot in common. More on what he wanted in a minute…

At Casa Kiriakis, Victor is celebrating the death of Stefan and what that means for DiMera. Will Horton (Chandler Massey), Sonny Kiriakis (Freddie Smith), and Brady Black (Eric Martsolf) can’t. They think he’s sick to celebrate like this.

Eventually, Brady changes the topic and confesses that Kristen is pregnant with his baby. Victor calls him an idiot and wants to know what he was thinking. Brad defends himself by saying that he hadn’t touched her since learning she wasn’t really Nicole Walker (Arianne Zucker). Victor believes there is only one solution—end the pregnancy. Brady refuses to try forcing Kristen to do such a thing.

Later, he runs into both her and Dr. Rolf and what he overhears has him concerned for the baby. Kristen swears she and the baby are fine, but Rolf is just being extra careful. In fact, she thinks that the good doctor needs to be living with her to keep a close eye on things. Brady says that “quack” will do that over his dead body.

Gabi is in total denial about Stefan. She even asks Dr. Rolf to work his magic. Unfortunately, after examining Stefan, he determines there is nothing to be done. Gabi calls him a liar and accuses him of trying to help Kristen take over DiMera. Rolf insists that is not the case. His other patients had a spark of life in them, which Stefan does not.

Rafe comes in in time to see Gabi going off on Rolf and wanting him gone. Rafe tries to calm her down and console her. There is no listening to reason. She is determined to fight. Rafe insists that he wouldn’t have chosen Stefan for her, but he believes he made her happy and that was enough. He thinks she needs to face reality. Gabi doesn’t know how. Alone, she begs Stefan to help her figure out how to say goodbye.

‘Days of Our Lives’ spoilers: Fight for Julie

Outside Stefan’s room, Eli and Lani Price (Sal Stowers) are discussing her about  interview and Stefan’s fate. She is still blaming herself for what happened, but says that the review found she did nothing wrong.

As for Stefan, he is Julie’s only hope. Lani doesn’t believe that Gabi is going to allow this, and isn’t sure who the right person would be to even bring up the question. Ultimately, Eli decides it’s up to him to at least try. Especially after they learn that Gabi is starting to accept the situation with Stefan.
He later enters Stefan’s room and offers his sympathies to Gabi, then asks if they can talk a minute.