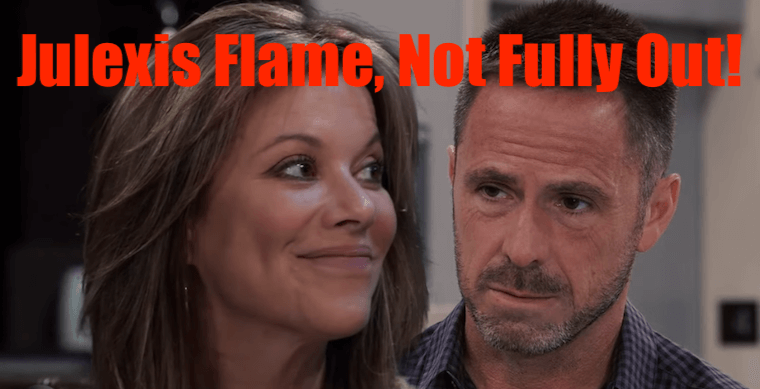 ‘General Hospital’ (GH) Spoilers for the week of Monday, September 9-Friday, September 13 indicate that Dr. Liesl Olbrecht (Kathleen Gati), Nina Reeves (Cynthia Watros), Valentin Cassadine (James Patrick Stuart) and fam will be celebrating something! Quite possible, the fact that Sasha Gilmore (Sofia Mattson) is cured of the almost deadly strain of avian flu she contracted thanks to Cassandra Pierce (Jessica Tuck) and her deadly schemes.

All this and no news of her being found out as a fake by the good Dr. Finn Hamilton (Michael Easton). Looks like Bradley Cooper (Parry Shen) did his job well, and speaking of Brad Cooper…

Michael Corinthos (Chad Duell) will take note of something, he notices a picture of Baby Wiley Cooper-Jones and will realize just how much the kid resembles him when he was the same age. This will cause Brad Cooper to panic, and in that panic he could turn to Grandpa Julian Jerome (William deVry) and ask for a favor, which may include asking Julian to whack Liesl so that whatever information she has regarding the true parentage of little Wiley Cooper-Jones will die with her and they can have their little family in peace. Brad may have to wait on an answer for that, though.

‘General Hospital’ Spoilers: Things heat up between Lulu and Dustin

Lulu Falconeri (Emme Rylan) will bump into Dustin Phillips (Mark Lawson) this week and it looks like those two will take some tentative steps toward love. Will it work? Who knows? Let’s just hope that whatever step they take doesn’t end up in heartbreak again for poor Lulu. She has had enough lately. But what’s the deal with this Dustin guy, everyone seems to be sleeping on this guy.

No one’s really asked about what he does (except for the fact that he does ride share), he doesn’t seem to have a past or anything… and that tells me that he does have a past that he’s trying to escape from. Let’s just hope its something frightfully embarrassing rather than downright dangerous.

Maxie Jones (Kirsten Storms) has another mission in mind for herself. No, she’s not trying to play cupid again, thank God. This time she wants to get someone even bigger than Ava Jerome (Maura West) for the cover of Crimson. This will definitely boost sales and make Jasper Jacks (Ingo Rademacher), as well as boss Nina, very happy. But who will she get to follow up Ava? That’s the question of the year!

Jason Morgan (Steve Burton) will have lots of trouble sleeping this week, and it will likely be because he has a lot on his mind. But what’s causing him to lose sleep? Is it a problem with Carly Corinthos’ (Laura Wright) pregnancy? Or maybe thoughts of poor, dead Drew Cain (Billy Miller)?

The problems that Dev Cerci (Ashton Arbab) is creating in the Corinthos household? Could it be the ever present burden of our friendly neighborhood cult leader, Shiloh Archer (Coby Ryan McLaughlin), or could it be a problem with lady love Sam McCall? (Kelly Monaco) Either way, the guy needs a nap.

‘General Hospital’ Spoilers: Kim and Franco give in

Dr. Kim Nero (Tamara Braun) could be facing another temptation this week. She successfully staved off temptation last week in the name of her friendship with Elizabeth Webber (Rebecca Herbst) and Franco Baldwin’s (Roger Howarth) wife. However this week it looks like her defenses are low and Franco, AKA Drew 2012, will finally succeed in getting to her and they’ll have a cheatin’ good time.

Poor Liz will be at her wit’s end by the end of the week, trying desperately to hold her marriage and family together in spite of ol’ false memory Franco trying to do everything to tear them apart. Who knows what will happen when she and Sam cross paths later on in the week!

Looks like Sonny Corinthos (Maurice Bernard) will be adopting out strays this week as he tries to get another place for Dev to stay in lieu of Jax not liking the fact that daughter Josslyn Jacks (Eden McCoy) looked so cozy with him. Monica Quartermaine (Leslie Charleson) will pay a visit to the ICU at GH, Hayden Barnes (Rebecca Budig) will express sympathies.

Ava will talk to Julian about rethinking some life choices and it’ll look like that might prompt him to contact old flame Alexis Davis (Nancy Lee Grahn) about some things… but what will that be? Stay tuned!