‘Days of Our Lives’ Spoilers Tuesday, September 3: Gabi Gets A Rude Awakening! 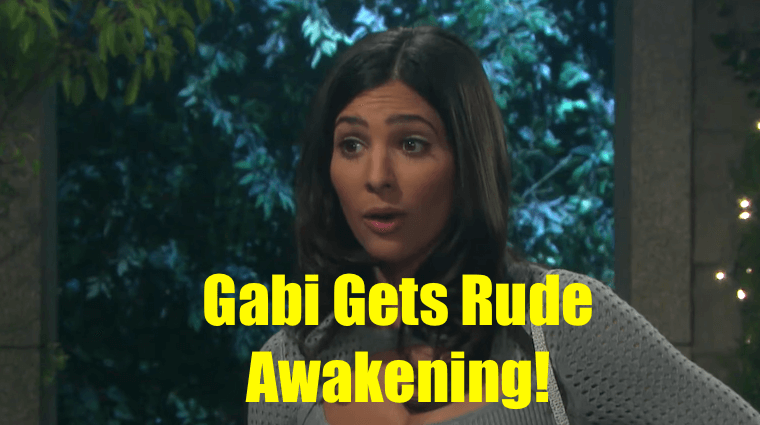 ‘Days of Our Lives’ Spoilers: Mom… is that you?!

‘Days of Our Lives’ (DOOL) Spoilers for Tuesday, September 3rd, 2019 indicate that Stefan DiMera (Brandon Barash) will stare at the phone in disbelief when he hears his Mom’s voice on the other end of the line. He probably won’t believe he’s not being punked at first, but Vivian Alamain (Robin Strasser) will assure him that it is really her and that she’s coming back to Salem to reunite with him this week.

It looks like Mama Vivian shouldn’t be counting her chickens however, because one of Kristen DiMera’s guards will temporarily put a damper on things when he pulls a gun on Eric Brady (Greg Vaughan) but it looks like it’ll only end up as a scare and not a life-threatening situation after all.

‘Days of Our Lives’ Spoilers: Sarah plays the martyr

While all this is going down, Eric will tell Sarah Horton (Linsey Godfrey) the news so far, he will let her know that Nicole Walker (Arianna Zucker) is indeed still alive, but according to Vivian and Dr. Wilhelm Rolf (William Utay) she and daughter Holly Jonas (Scarlett and Harlow Mallory) have escaped somewhere and now its up to Eric to find him.

Of course this will only fuel the fire in Eric more, he wants to find his soulmate desperately. Poor Sarah however knows that if this happens, she’ll be left out in the cold. Nevertheless, she wants Eric to be happy so even though she’s heartbroken, she pushes aside her own feelings and tells Eric to go get his girl. (Awww.)

‘Days of Our Lives’ Spoilers: Hope wonders what might have been

Sarah isn’t the only one with a broken heart, it seems. Poor Hope Brady (Kristen Alfonso) will be left with mixed feelings as well after she reads Ted Laurent’s (Giles Marini) last letter to her. Fortunately, she’ll have Doug Williams (Bill Hayes) by her side at the time so she’ll have a shoulder to cry on.

Hope still realizes that Ted had his faults, after all, he did help fake Holly’s death and put a lot of people through a lot of misery, but the fact of the matter is, he was really in love with her and if he’d straightened up and flown right, Hope might’ve eventually forgiven him. However, the chance has come and gone now, leaving Hope to wonder if she’ll ever actually find love again.

‘Days of Our Lives’ Spoilers: Doug is worried, Gabi gets a rude awakening

Looks like Hope and Doug will have something in common, well, maybe the grief won’t be quite so intense for Doug, seeing as Julie Williams (Susan Seaforth Hayes) is just in the hospital, but is very nearly near death for the time being. Doug is worried that he will lose her and it’s a very real fear. As for Gabi Hernandez (Camila Banus) who refused to help when she saw Julie on the ground, she’ll still think that Julie is faking it but she’ll at the very least be concerned.

However when she finds out that Julie is actually in the hospital for real she’ll be horrified. (Well Gabi it looked like you proved Julie right.) Gabi’s going to have her plate full in the coming weeks what with Vivian’s return and the whole thing with Kate being CEO of DiMera now. How will this affect the newlyweds? Stay tuned!

NBC ‘Days of Our Lives’ Spoilers: Kristen DiMera (Stacy Haiduk) Does A…