‘Days of Our Lives’ Spoilers: The Real Nicole Walker (Arianne Zucker) Is Back, Return Airdate Revealed! 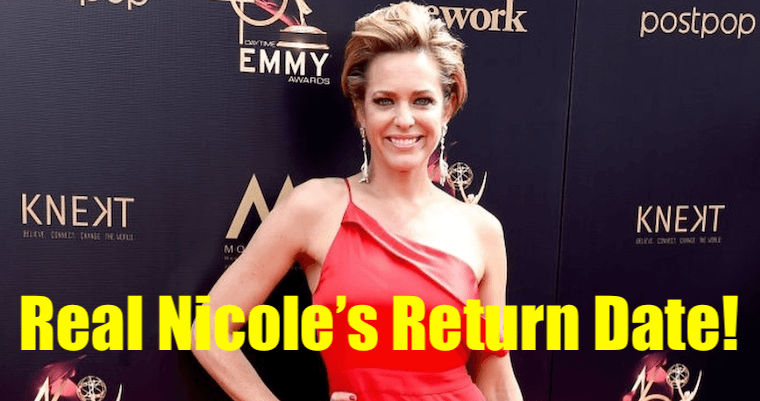 ‘Days of Our Lives’ (DOOL) spoilers tease that the real Nicole Walker (Arianne Zucker) is finally back. But didn’t we say that a few months ago? This time around it’s different. It’s not an imposter and it’s not someone who is playing face swap games with the residents of Salem. Instead, its’ the real Nicole in all of her glory. Here’s what you need to know.

‘Days of Our Lives’ Spoilers: The Real Nicole Walker (Arianne Zucker) Is Back, Return Airdate Revealed!

Back in April, it was thought that Nicole had returned from the dead. Little did fans know that it was actually Kristen DiMera (Stacy Haiduk), who had pretended to be Nicole in order to get her revenge on the people who have done her wrong in Salem. But now that the mask is off for Kristen, this is a perfect opportunity for Nicole to come out of hiding and of course, reveal that she is indeed alive and well.

‘Days of Our Lives’ spoilers tease that both Kristen and Xander Cook (Paul Telfer) are trying to wiggle their way out of their current situations by revealing Holly Jonas’ whereabouts. Of course, they are the only two Salemites that know that Holly didn’t die in that terrible accident several months ago. It appears as though that the little girl might have been with her real mother this entire time.

While there were a lot of people who were shocked to see Nicole when she returned to Salem back in August, they were also equally shocked to see how much she has changed. Thankfully, the real Nicole will be emerging and yes, she will clear up a lot of things about what has been going on behind the scenes. Look out for Arianne Zucker to once again switch gears beginning September 6!

‘Young and the Restless’ Spoilers: The Michael Muhney Update – What The Ex-Adam Newman Up To These Days!

NBC ‘Days Of Our Lives’ Spoilers: Star Shares A Special Anniversary This…

NBC ‘Days of Our Lives’ Spoilers Update: Kristen Still In Shock Over…