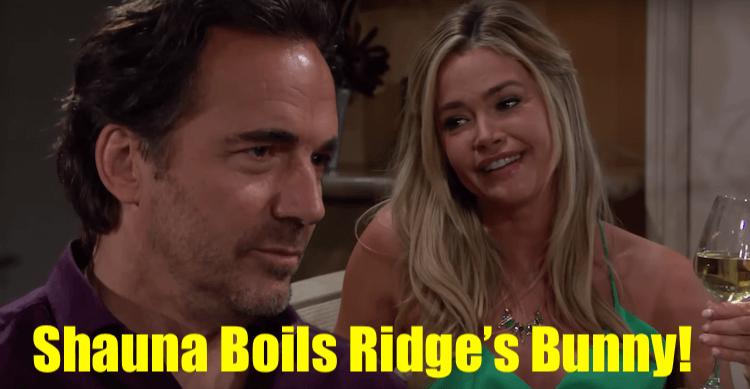 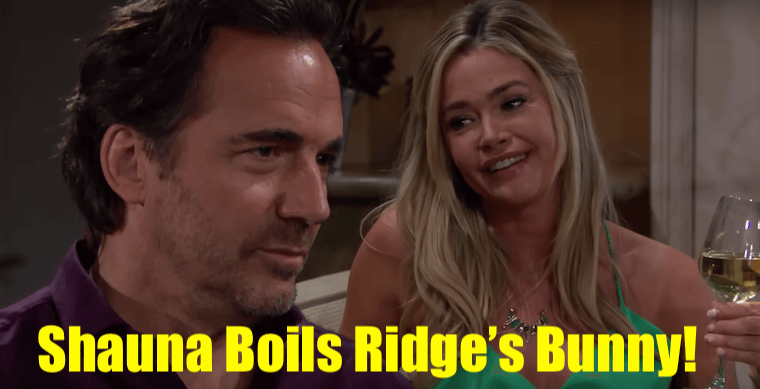 ‘Bold and the Beautiful’ Spoilers: Will Shauna end up boiling Ridge’s bunny?

‘Bold and the Beautifuf’ (B&B) Spoilers are saying that thankfully, Ridge Forrester (Thorsten Kaye) doesn’t have a rabbit – or any sort of pets around. Kidding! Seriously though, one would think that a woman as experienced as Shauna Fulton (Denise Richards) would be past the age of getting butterflies when she kissed unconscious men.

One would expect this out of a girl fresh out of college, or a spinster that had never gotten the chance to be with a man, but Shauna is a woman of the world who has a daughter. She has also dated both Bill Spencer (Don Diamont) and Storm Logan (William deVry) so I think its safe to say that Shauna has kissed her fair share of fully conscious, fully compliant men.

‘Bold and the Beautifuf’ Spoilers: Why Ridge?

So… why Ridge Forrester? What is it about his lifeless body that made her heart go boom? I guess it could be argued that, for Shauna its been awhile since she was last on the dating scene and maybe her mind (and hormones) are just playing tricks on her, as loneliness is wont to do. However, we have no idea if that is actually the case. Now, she hasn’t been in town as long as Flo and probably therefore has been getting settled these last few months so she hasn’t had all that much time for socializing. Add that onto the whole ‘daughter getting thrown in jail’ thing and you’ve got a recipe for some loneliness-a-brewin’.

‘Bold and the Beautifuf’ Spoilers: Homebody or maneater? You decide.

We don’t know what her dating life was back in Vegas, though. We don’t know if she was a homebody (which could very well be the case) or if she was out every night. I don’t know about you, but Shauna doesn’t really strike me as much of a shrinking violent so I’m just going to throw that theory out the window right now. In fact, Shauna Fulton seems to be a bit of a man-eater. Bill Spencer was only with her for a little while, but he could probably tell you a few tales. (Then again, even when it was reveal that he had been with her, it was barely a blip on the radar screen, so maybe Shauna’s just not that memorable? Ouch.)

‘Bold and the Beautifuf’ Spoilers: Married Man? Not a problem!

Shauna seems to have no real misgivings about Ridge being a married man, which gives the impression of man-eater. She’s very confident and changing Ridge’s clothes when he was passed out drunk didn’t seem to even bring the faintest blush of embarrassment or awkwardness. Also, the way she teased him saying that if anything had happened between them he would remember it definitely screams man-eater.

But what’s rather disturbing about this whole thing, besides her wanting to get her hooks into a married man is the fact that she has just kissed him once. Just once! When he couldn’t respond, and that’s enough to warrant all this gushing and butterflies? I mean, it’s not like he kissed her back, he was unconscious so it’s not like she could tell if he were a good kisser or not… unless Shauna’s into that. Moving on!

‘Bold and the Beautifuf’ Spoilers: She doesn’t even know him!

She hasn’t gotten to know Ridge so she doesn’t know him on an intimate level (I’m not even talking physical intimacy) and one bad night of sharing stories when one is drinking does not count. She hasn’t been there in every day life with him, she’s not an actual friend or even someone he’s spent time with more than once, she’s the mother of the woman who hurt his daughter and that… is not the basis of a stable relationship at all. Shauna is acting way too immature for her age and it doesn’t bode well. She’s acting like a 13 year old girl.

‘Bold and the Beautifuf’ Spoilers: Not her first rodeo?

Since we really don’t have much of an idea about what her life was like in Vegas beforehand one wonders if Shauna hasn’t pulled this behavior before. If she hasn’t gotten a few ‘obsessions’ under her belt and become a bit of a ‘problem’ for them. After all, its been mentioned several times that Shauna and Flo had to pack up and leave in the middle of the night when Flo was in high school when she and Wyatt Spencer (Darin Brooks) were together.

So maybe there was another married man’s wife that was after her? Or perhaps it was a situation where she had stalked a man and he had called the cops and she had to get the heck out of dodge before the cops arrived? I’m kind of strongly suspecting the former but stranger things have happened.

‘Bold and the Beautifuf’ Spoilers: Gearing up for a stalking good time, maybe?

Either way, Shauna’s obsessive behavior is quite worrying. I could see her showing up to functions where she knows Ridge will be, or trying to get him alone when he obviously isn’t interested. Now, what these circumstances would be I don’t dare speculate because so far there hasn’t really been much chance for Ridge and Shauna to interact but that doesn’t mean that she couldn’t engineer things to happen along the way so that she could bump into him accidentally-on-purpose.

There’s also the idea that maybe she would try to insert herself into Ridge’s day to day life more now that she smells blood in the water with his marriage.

‘Bold and the Beautifuf’ Spoilers: Could her rivalry with Brooke turn bloody?

An unthinkable possibility is that she might just try and eliminate Brooke Logan herself, but since Shauna doesn’t really seem like a violent person we’ll put a pin in that theory for now. However, the more obsessed she becomes with Ridge and the more desperate she becomes, the more violent tendencies might be prevalent. Like I said, we don’t know what she was like in Vegas or why she actually left.

On its face, it looks like Shauna saw that her daughter was having a good time in LA and decided to follow suit, but we don’t know if there were any reasons behind that besides maybe boredom. Whatever the reason, we won’t know it until all is revealed and perhaps it will be with this new plot of Shauna’s supposedly ‘harmless’ little crush on Ridge. Stay tuned!!!