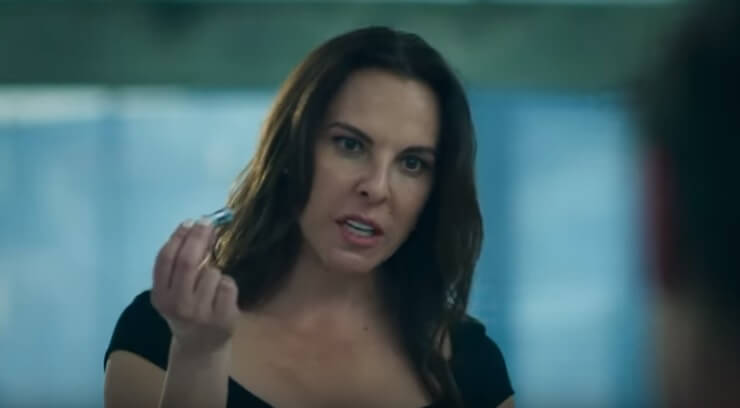 Your Monday, July 29th La Reina del Sur recap of the Gran Final finds Cayetana Segovia (Luisa Gavasa) making plans, a big escape, a revelation about the US plot, and a cliffhanger ending. If you missed it, let’s get to your La Reina del Sur spoilers.

Today, Epifanio Vargas (Humberto Zurita) confronts his brother-in-law over the plot to kill him while Teresa Mendoza (Kate del Castillo) looks on. She then lays out the whole DEA plot to interfere is Mexico’s elections, but there’s more to learn. Namely, what the vial Alejandro brought to the meeting with Epifanio is.

While Francesco Belmondo (Raoul Bova) holds a gun to his head, he’s ordered to drink the substance. Given the two choices and the questions, he decides to sing like a canary. He tells them what the poison was, but there’s more.

Genoveva Alcalá (Kika Edgar) has been brought there by Ray Dávila (Alejandro Speitzer) and overhears everything. She’s shocked and angry that her own brother would try to kill her father’s child, and doesn’t even know him anymore.

While all this was going on, a signal was detected. There’s reinforcements coming their way, so Teresa and the rest all pile into a car and take off. They’re not fast enough, though, to get away because the DEA is on their tail the whole time. Teresa dodges shots from a helicopter by swerving like a drunk as they try to escape.

Eventually, they come to a roadblock that is covered. Teresa and the rest are ordered out of the vehicle at gun point. They end up in a big fight that allows Alejandro to take off in the car Teresa had been driving.

What he doesn’t know is, this whole roadblock was a setup by #TeamTeresa, and Jonathan Peres (Tiago Correa) was one of the armed men. As the car leaves the fake check point, the DEA people believe that it is Teresa, Francesco, and Epifanio in the vehicle so they blow it up with a rocket launcher. Couldn’t have happened to a nicer guy. See ya, Alejandro…

Following her confession to the police, Cayetana arrives home and is greeted by a lawyer. He says she’s only getting 48 hours to settle affairs before she’s taken in, and offers to watch after Sofia Dantes (Isabella Sierra) for a time, if needed. She assures the man Sofia will be well-cared for, then asks him to make sure her will is updated so that all three of her granddaughters will inherit her fortune.

Later on, Cayetana places a call to Teresa to ask her to come pick up her daughter. Teresa is worried, as Cayetana had vowed to take her daughter away.

Cayetana promises that Sofia is fine, but she knows that the child misses her and wants to be back with her as soon as possible. She also has an apology to make. She admits to really being the one at fault for Teo Aljarafe’s (Miguel de Miguel) death. She gave him too much, not making sure that he didn’t become entitled. Again… it’s getting very cold somewhere.

Teresa has promised to leave within hours to get her daughter, but the rest of #TeamTeresa has plans as well. Rocío Aljarafe (Sara Vidorreta) is going to marry Faustino Sánchez Godoy (Lincoln Palomeque) as planned and then go back to Spain for a visit.

Paloma Aljarafe (Agata Herranz), weirdly, decides to name her child after Ray. You know, the guy who was two-timing her with another woman and couldn’t truly handle raising another man’s kid. She is going to be returning to Spain with Teresa, and we assume she’ll be staying.

Marcela (La Conejo, played by Carmen Navarro) has changed her mind. After getting a sudden communication from the guy that dropped her, she’s going to forget about joining Teresa and return home instead.

Sheila (Cuca Escribano) and César “Batman” Güemes (Alejandro Calva) are planning to stick together, and Batman is never going to forget how Teresa saved his skin.

Oleg Yasikov (Antonio Gil) has a big surprise for Teresa today. He finds out that the vial mentioned earlier contained a banned nuclear substance that came from Russia. Apparently, the two countries have been in cahoots the whole time to control Mexico’s politics (and the trafficking). He believes the treatment his government was giving him prior to Teresa’s arrival in Moscow was designed to make him want to leave and help her take out Zurdo Villa (Flavio Medina).

Teresa is shocked and not happy about it. She thinks Mexico’s future sounds sad, and can’t believe that Epifanio is the lesser of evils in this situation.

Sofia is overjoyed when a car pulls up at the Aljarafe estate and Teresa gets out. The two hug and promise each other they’ll never be kept apart again.

Paloma then introduces herself to her hermanita and hands Sofia’s cat to her. Sofia is happy to meet Paloma, and can’t wait for Rocío to arrive, who Paloma promises will visit soon.

The happy occasion is tainted, though, when Sofia leads the other two into the house where Cayetana had fallen asleep in her rocking chair. Except not. Sofia is unable to wake the woman, and Paloma steps up to check her. She informs Sofia and Teresa that Cayetana is dead. We’re assuming Paloma, as one of the heirs, will stay behind in the house.

Months later, we learn what happens with a few other characters. Danilo, for one, is still working with the Vargas campaign and has apparently stepped up to a higher position after Alejandro’s death. He’s honored to work with him, and to keep doing so.

Meanwhile, the exit polls are finally coming in to show Epifanio in the lead, and his victory seems a done deal. He’s happy, but Genoveva seems gloomy on the big night. Dare we say, she seems a bit bitter about what this victory ended up costing.

We see her leave Epifanio alone inside to get some air, and her water breaks.

Teresa is now hiding, as she’d once mentioned to Oleg, in Australia with Sofia. It looks like they’re on an island and living peacefully. But while Teresa reads in a hammock, all of a sudden, a large vessel approaches the island as well as two helicopters. Teresa is alarmed and orders Sofia inside, but the kid’s obviously not having that after getting snatched the last time she wasn’t right by mom’s side.

Teresa is taking cover behind a tree with a gun as she watches the approach, when she hears Sofia. After scolding her for not listening, she turns her attention back to their company. We hear Sofia call out, “Mom,” and Teresa freezes a moment before looking back. And Telemundo is officially evil. We’ll be awaiting the next season when it comes to learn what happens next.

‘Bold and the Beautiful’ Spoilers: Lope Makes It Out of the Ashes – Liam And Hope Can Now Get Their Happily Ever After!