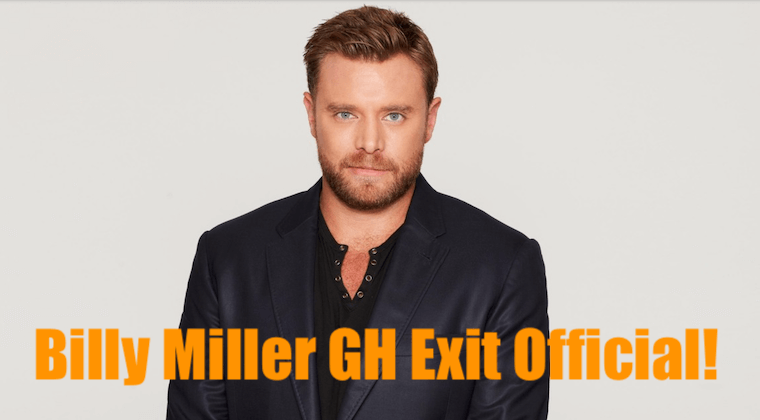 ‘General Hospital’ (GH) spoilers indicate that Billy Miller (Drew Cain) will soon be leaving Port Charles. The handsome actor, who has played Drew since 2014, has confirmed that he is parting ways with the hit ABC soap. Here’s what you need to know.

According to Soaps.com, Billy made his debut in 2014. He was initially cast as Jason Morgan, but the role was given to actor Steve Burton when he returned in 2017. Since then, Billy has played Drew after a memory swap storyline between the two brothers managed to put audiences at the edge of their seats for many months.

Billy’s exit was confirmed by his rep Marnie Sparer. She posted a video showing balloons in his dressing room and a copy of a handwritten good-bye letter along with a final typed and signed letter. In the letter, Billy talks about what he thinks good-bye means and suggests that he and the cast and crew will part by saying “until next time.”

So far Billy Miller himself hasn’t made any comments about his departure, however, it’s long been speculated that he would be leaving for some time. So far his final air date has not been released or confirmed by the ABC network.

With that said, there’s also a strong possibility that Billy might be making the switch to The Young and the Restless on CBS. He used to play Billy Abbott before Jason Thompson took over the role for him in 2014. While nothing is certain right now, there’s also been talk of Jason wanting to leave the daytime television world in order to pursue other opportunities in the entertainment industry. Of course, fans would love to see Billy back in front of the cameras one way or another. We will definitely update you with more information as it rolls in.