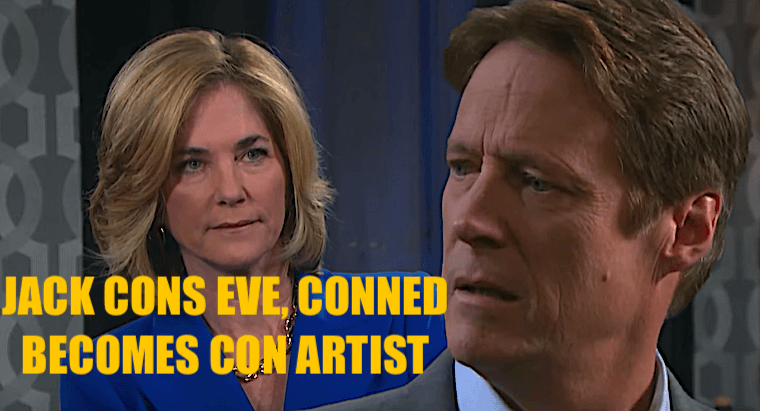 ‘Days of Our Lives’ (DOOL) spoilers indicate that there may be a new pairing in Salem, and Claire Brady (Olivia Rose Keegan) is looking to end it all. There’s also trouble in paradise for Eve Donovan (Kassie DePaiva) and Jack Deveraux (Matthew Ashford), and love in the air for another member of the family. If you missed the action, let’s catch you up on some highlights in today’s Days of Our Lives highlights.

Carrie Brady (Christie Clark) is feeling a bit down today as she and Rafe Hernandez (Galen Gering) catch up as she’s closing up the pub. It seems that things have not been so good for her abroad, and she’s now officially on the market. She reveals to Rafe that she has no idea what happened. One day, it just wasn’t there anymore, and she was the only one willing to fight. They commiserate after their shared single status before things get a little more personal. Do we smell a rebound reunion about to happen?

Days of Our Lives spoilers: Trouble in paradise?

Eve is furious at Jack today, as she’s learned that he was busy getting JJ Deveraux (Casey Moss) out of legal trouble. She feels that as commissioner, he should have told her about this before actually doing anything. She wants to know why he would even bother to do something like that, but Jack doesn’t tell her the real reason for his act of kindness.

While he’s in the other room, Eve takes the time to spy and finds that famous diary in his briefcase. She’s shocked that he has it, angry that he might want his memories back, and worried about the possible effects of the serum. She confronts him on the lie after letting him find the diary, which she’d placed under the cover of a room service dish.

He denies that he is interested in getting his old life and love back. The only memories that mean anything to him are those of his children. Eve’s understanding, but she’s also quick to point out the risks. Jack assures her he hasn’t decided for sure if he wants to take it, and Eve is relieved she’s got time to talk him out of it. Of course, as Jack is starting to get more of his memories back he’s bound to realize just how much Eve is using him, which will make him crack; it’s only a matter of time. But Jack is playing it smooth by appeasing Eve’s ego.

Meanwhile, JJ is having a bed-centered reunion with Haley Chen (Thia Megia), who still can’t believe any of this is real. JJ assures her it really is, and he muses on what his dad is going to say when he learns his plot didn’t work. Haley, worried about the pending charges, wisely suggests that provoking Jack isn’t the best idea. We’re with her. Seriously, dude. Get a clue and grow up. You’ve won, and even Haley isn’t that angry and she was far more harmed by Jack than JJ.

Anyway, JJ informs Haley that the charges are no longer an issue, although he’s not sure if he trusts Jack. There’s probably some angle he doesn’t know about. They later end up reminiscing some about their brief past before breaking into a song.

Finally, we have a real mess today involving the Brady family. If you remember, Claire has had Ciara Brady (Victoria Konefal) tied up in the famous cabin, doused in gas, and about to go up in flames. No amount of begging has helped. Lucky for Ciara, she’s got backup.

Ben Weston (Robert Scott Wilson), Hope Brady (Kristian Alfonso), and Marlena Evans (Deidre Hall) are on the trail and have arrived at the cabin. Ben eventually breaks down the door before Claire can use the lighter. Between the three of them, they manage to get Claire to set down the lighter and untie Ciara. Claire is a mess, and completely freaked out by what she’s done. While Hope and Ben get Ciara out of there to be checked out, Marlena stays behind to help Claire. It might not be enough.

Claire is shook by what she’s become, and thinks she’s worse than Ben ever was. She almost killed people she loved, and she feels she deserves death. We seriously thought for a second Marlena was about to witness a firey end to this story, but her skills as a therapist save the day. She gets Claire to put it down again after telling her that Ben rebuilt his life, and she can, too. She’s also got a lot of people that love her, and Marlena won’t give up on her healing.

Meanwhile, Shawn-Douglas Brady (Jason Cook) has arrived at the hospital after a call from Kayla Brady (Mary Beth Evans). He’s in a panic, because no one was at the loft, and he found blood. The pair explains what happened, and he has a hard time believing his daughter actually tried to kill anyone.

Later on, Hope, Ben, and Ciara arrive at the hospital and confirm what happened. Shawn is horrified and apologetic to Ciara. He’s assured that Ciara is fine, Claire is in Marlena’s care, and that Claire is going to need him.