‘Days of Our Lives’ Spoilers: JJ & Haley Love Lives Wild & Free In the US of A – Happy Ending To Politicized Story Angle! 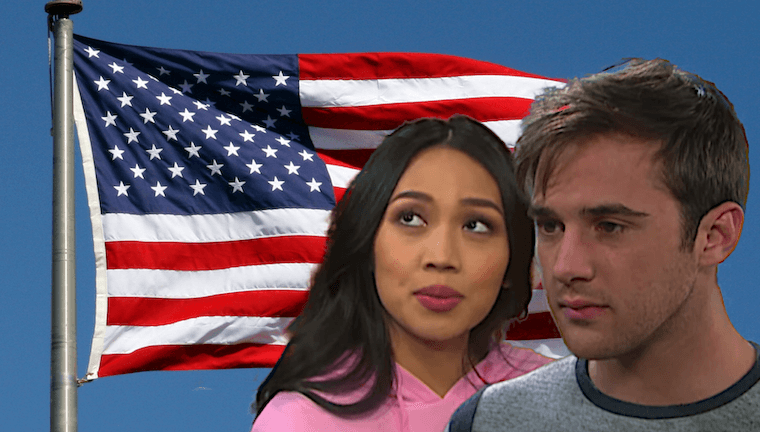 ‘Days of Our Lives’ (DOOL) spoilers has some danger for Tripp Dalton (Lucas Adams), an explanation from Haley Chen (Thia Megia), and confusion for Hope Brady (Kristian Alfonso). If you missed all the Days of Our Lives spoilers, let’s catch you up with some highlights.

‘Days of Our Lives’ (DOOL) Spoilers: JJ & Hayley Love Lives Wild & Free In the US of A – Good Conclusion To Controversial Story Angle!

JJ Deveraux (Casey Moss) is still reeling from having Haley show up on his doorstep. Not enough, though, to not jump right into action. He’s all set to grab a bag he’s still got packed and take off, but Haley stops him. What happened?

It seems Melinda Trask (Laura Kai Chen) and her ex made a huge donation at one point to a senator. Melinda called in the favor, which got Haley released from detention and will allow her to stay in the US while she sorts out of her green card issue.

Now that they are both going to be staying in Salem, they’ve admitted their feelings and they close off their story for the day by celebrating this second chance soap-style.

Days of Our Lives spoilers: Next to go?

We’ve already got Ted Laurent (Gilles Marini) and Kate DiMera (Lauren Koslow) cooling their heels in the DiMera tunnels, but they might not be the only ones who go MIA. Before we get to that, let’s fill you in on what the pair’s up to. As predicted, they’re not exactly friendly when Ted tries to wake the knocked-out Kate by pouring some booze down her throat. Really? Seems a really bad method to us. Kate agrees, as she wakes up choking and asking if he’s trying to kill her.

It doesn’t take her long to recognize where they are, or for her to start grilling Ted while filling him in on her own situation. Nicole Walker (Arianne Zucker) knocking Ted out isn’t adding up, and Kate’s pretty sure that Kristen DiMera (Stacy Haiduk) might be alive and behind all this. Of course, she just thinks that Kristen might be controlling poor, grieving Nicole.

Meanwhile, Kristen is desperate to make sure that the job’s been done. She calls Xander Cook (Paul Telfer) to confirm, and he assures her it was. He nearly gets busted in the process, btw, by Sarah Horton (Linsey Godfrey), but he manages to explain it away by saying he “killed” some untrue and hurtful stories about Titan.

Days of Our Lives Spoilers: Kristen & Hope Get Into It

Kristen may be satisfied now, but Hope isn’t. The former Commish starts asking more questions of Not-Nicole, and that gets Kristen angry. After sending a note from Ted’s phone saying he’s not coming back to Salem, she decides that nosy Hope still needs to be dealt with. This time, though, she’s the one who is going to handle things. Not Xander.

Related to all this, Sarah has grudgingly accepted the necklace from Xander and wears it to her celebration dinner with Rex Brady (Kyle Lowder). Hope also happens to be in the same place and sees this, so she asks where Sarah got that necklace. Looks like Pepe’s rescue ploy might work after all.

Finally, we get to the increasingly unhinged Claire Brady (Olivia Rose Keegan). After catching Tripp and Ciara Brady (Victoria Konefal) looking like they’d just had a little private fun, she’s fuming. So much so, she almost blurts out what she did in the heat of the moment. Luckily for her, Eve Donovan (Kassie DePaiva) is a suspicious sort and texts to say she thinks Claire’s being set up. This avoids a confession just yet, but doesn’t stop the danger brewing.

Claire ends up pulling a knife from the counter and is soon holding Tripp down on a table with the weapon at his throat while she rants. Ciara tries to talk Claire down and remind her that she loves Tripp, so she doesn’t want to hurt him.

Meanwhile, Ben Weston (Robert Scott Wilson) comes across Marlena Evans (Deidre Hall), who thinks Ben doesn’t look quite right. She talks him in to letting her buy the two some chowder so they can talk. She eventually gets Ben to open up, and he not only tells her that Claire is the arsonist, but also about Ciara and Tripp’s plan to catch her. Marlena doesn’t like this any more than Ben, and decides they need to get to the loft before something bad can happen. When they arrive, we see Marlena gasping at something.