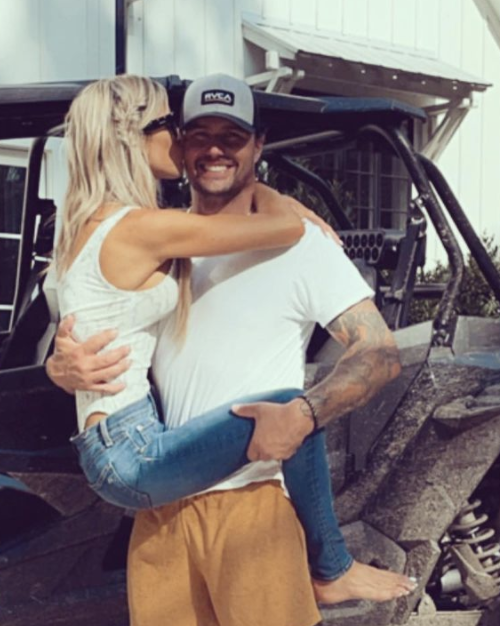 Christina Haack has sent the internet wild with rumours that she has gotten engaged to none other than Joshua Hall.

The news would be a shock given that the pair only began dating in June of this year. In addition to that, Christina had just finalised her divorce from her ex-husband Ant Anstead.

But the rumours could be true in light of the following information. According to the pictures obtained by Page Six, Christina was seen wearing what looked to be an engagement ring when the couple were standing next to each other.

Not only that, but Christina had also hinted at such a thing just last month. In an Instagram post at the time, she was seen on a boat with the ring visible on her hand before she deleted that photo with something similar.

Things are quite clearly moving very fast, and that has got many people talking on social media. This is the third high-profile relationship that Christina has been in, and therefore, people have questioned whether she has thought things through in light of her past relationship failures.

Nevertheless, Christina is not looking to those who are doubting her. In fact, she could not be any more disinterested by them. In a prior post on social media, she remarked: “I may be a bit crazy. I’m definitely not perfect, but I will never live my life based on other people’s judgments or opinions. We pride ourselves on never judging others and always wanting others to be happy.”

Having said all that, her relationship has complicated things when it comes to co-parenting. Given that she has children with two previous husbands, Ant and Tarek El Moussa, the prospect of adding Joshua into the mix has made things a bit more complicated.

And that showed as Christina recently had a bust-up with Tarek on the TV show that they host together. When asked about the feud, she stated: “It can be stressful working with an ex. We did have an incident where some choice words were said on both sides, and I’m sure we both wish the whole thing never happened.” As long as Christina is happy, then who are to complain.