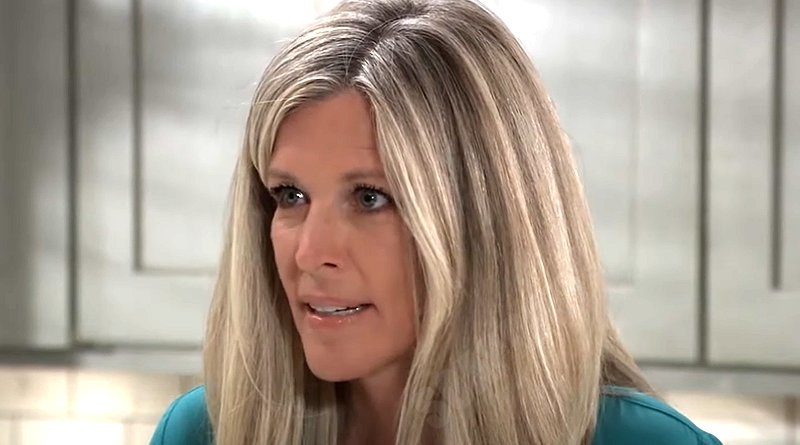 ABC ‘General Hospital’ (GH) spoilers reveal we’ve had plenty to say about Carly Corinthos (Laura Wright). She’s given plenty of reasons to give her the side-eye, or outright not like her. Her “helpful” solution with Britt Westbourne (Kelly Thiebaud) not long ago was among the worst.

But lately, she’s been showing a better side to herself and we like it. Let’s see how she was actually spot-on recently, and why we think she’ll be a voice of reason in a really stupid situation.

So, ‘General Hospital’ spoilers reveal Michael Corinthos (Chad Duell) and Willow Tait (Katelyn MacMullen) mean well. With Harrison Chase (Josh Swickard) on the verge of death, Willow performed what she thought was a kindness. A mercy. She gave Chase a little happiness by pretending they were still a couple. Then, she married him at his request.

We’ve said we think this is a huge mistake. Recently, someone agreed.

We saw a kinder and gentler Carly recently. She could tell she and Jason Morgan (Steve Burton) walked in on something between Michael and Willow. Instead of calling it out right there and taking charge, Carly asked for some alone time with Willow. She gently explained she can tell something is going on, and if she can tell, so will Chase and others.

Without being harsh or judging at all, Carly owned up to being in the wrong in the past in different situations and gave Willow some good advice. She told her these good intentions are just going to make things worse in the end. We can’t agree more.

The damage Chase will deal with now with be multiplied by a lot. She advised Willow to rethink their strategy without pushing too hard, but she did get it all out there. Then she offered to be a shoulder for Willow if needed.  We liked that. Now, she did it again.

In the August 2nd episode, Carly had to explain a bit of an awkward situation to Valentin Cassadine (James Patrick Stuart). She was surprisingly nice about it, considering who she was talking to. And she seemed 100% on Willow’s side. However, she doesn’t look to be in any hurry to insert herself into the situation. It’s a nice change of pace, and we think this approach is exactly what Willow will need as she deals with the Chase thing. Not to mention, the sudden appearance of Harmony Miller (Inga Cadranel).