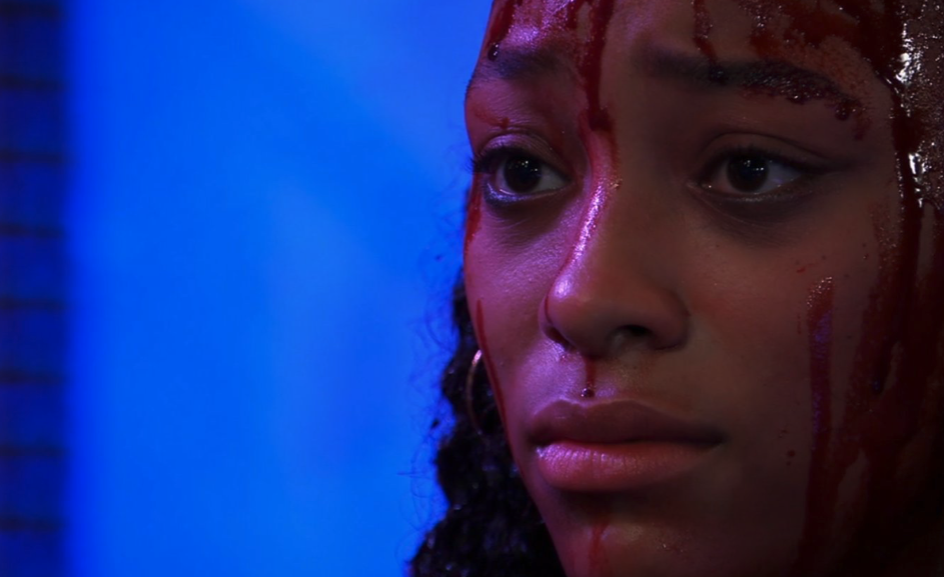 ‘General Hospital’ (GH) Spoilers reveal that Trina Robinson went to the art gallery to talk to Ava Jerome (Maura West) the night her high school graduation party was being held and promptly had to deal with the sprinkler system soaking her in… blood?

Not real blood, but rather, stage blood. Who’s idea was this? Also, it was my assumption that stage blood was too thick to go through a sprinkler system like that, but perhaps not? Was this Nikolas Cassadine’s (Marcus Coloma) idea of a prank to really catch Ava’s stalker by covering them in blood? Or was this the stalker’s idea of a prank where they ruined priceless artwork in a gallery by covering it in stage blood?

‘General Hospital’ Spoilers: What in the Carrie version of hell…?

Thankfully, her dress had arrived at the party before her, but Trina just wanted to go home. However, Joselyn Jacks (Eden McCoy) offered her to just get cleaned up and changed and then decide if she still wanted to join the party.

If she wanted to go home directly afterwards then she still could, but at least Joss was nice enough to want her there. It’s not like she had any other people there. Gotta love party scenes in soaps post pandemic, there was practically no one there at the graduation party at all! So much for the blowout of the century!

I find myself siding with Trina throughout this whole thing though, if I had been doused in stage blood right before my high school graduation party I wouldn’t be in much of a partying mood either. However instead of Netflix and chill, she opted to stay at the party and promptly get accosted by the ‘barback’. Sure buddy, and I’m the Queen of England.

This guy definitely does not pass the vibe check, especially since she just came from the art gallery after encountering some stranger. He also won’t give up his name… so what gives? Is this Ava’s stalker? What does he actually have to do with any of them? Or is he just an innocent barback who happens to be caught in the crossfire? I don’t believe that for a second. Stay tuned!!!