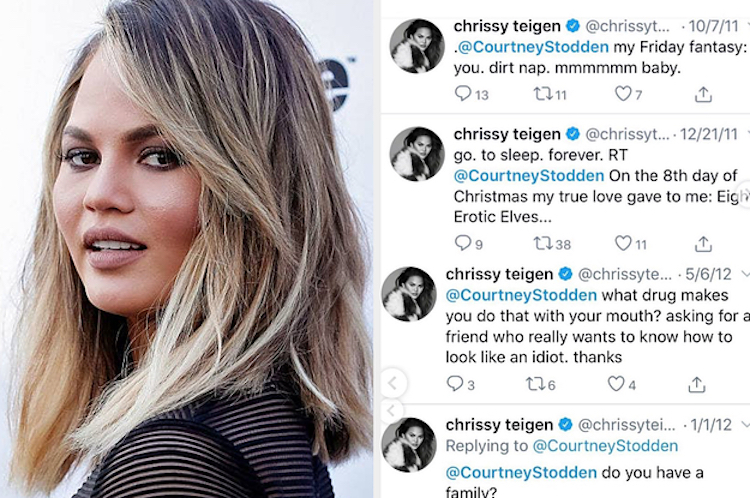 While Chrissy Teigen might believe herself to be the victim in her bullying scandal, the person that she bullied ten years ago, Courtney Stodden, has just pointed out that the model is yet to apologize to her for the nasty and horrible things she said. In an interview with The Daily Beast back in May,

Courtney revealed that Chrissy had sent her private messages on Twitter telling her to kill herself when she was still just a teen. And while Chrissy has offered a public apology, and has even complained about being canceled because of her bullying controversy,

Courtney has pointed out that the mother-of-two is yet to privately reach out to her about the matter. Here’s what you need to know.

Chrissy Teigen Has Just Lost All Her Credibility, Thanks To Courtney Stodden Again

Not only has Chrissy not apologized to Courtney, but she still has her blocked on Twitter, too. Courtney recently told TMZ in an interview, “I haven’t received anything from her. I don’t know what she’s talking about. I don’t know, she’s never reached out to my team. I never got any emails, anything.”

Earlier this month Chrissy admitted that she was “depressed” after she lost most of her endorsement deals and was basically canceled by society for her history of mean tweets.

In addition to what she told Courtney, she also suggested Lindsay Lohan should slit her wrists, bullied Farrah Abraham, and said a number of inappropriate comments about young reality television stars. If that weren’t enough, fashion designer Michael Costello also claimed that Chrissy tried to destroy his career as a designer.

Sharing a photo of herself relaxing in her luxury apartment, Chrissy wrote, “I don’t really know what to say here…just feels so weird to pretend nothing happened in this online world but feel like utter shit in real life. Going outside sucks and doesn’t feel right, being at home alone with my mind makes my depressed head race. But I do know that however I’m handling this now isn’t the right answer. I feel lost and need to find my place again, I need to snap out of this, I desperately wanna communicate with you guys instead of pretending everything is okay. I’m not used to any other way!! Cancel club is a fascinating thing and I have learned a whollllle lot. Only a few understand it and it’s impossible to know til you’re in it. And it’s hard to talk about it in that sense because obviously you sound whiney when you’ve clearly done something wrong. It just sucks. There is no winning. But there never is here anyhow.”