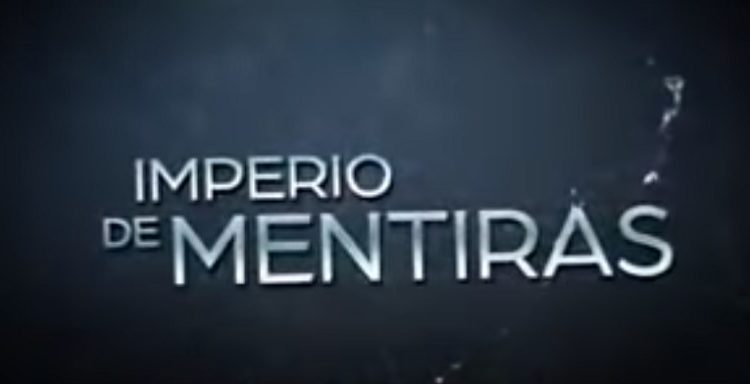 Univision Imperio De Mentiras Spoilers: Full disclosure and is there something in the water?

Univision Imperio de mentiras spoilers for January 21 prove why Elisa Cantú Robles (Angelique Boyer) is the Worst. Protagonista. Ever. Even so, we see one member of her family turning to her in a horrible situation. Is there something seriously wrong with this family?

We’re guessing some genetic defect must be at work here. Of course, given some of the other characters on this show, there could be something in the water as well. Here’s what’s up Thursday. ANd yes, you are reading that right. There’s no episode scheduled because of news coverage.

Plus, she thinks he killed her father. Because of that, Majo decides to get an abortion and asks for Elisa’s help tonight. However, she has a change of heart at the last second and will continue with the pregnancy. We really hope she doesn’t change her mind about the father as well.

This guy is trash, and we don’t understand why the writers are trying to make them into some tragic love story. She’s a Stockholm Syndrome victim, and he was her captor. Please, writers, break them up already.

Now, that whole Majo thing is going to have other consequences tonight. It seems Renata Cantú Robles de Arizmendi (Susana González) finds out what her sister planned to do and gets upset.

She’ll beg her mother to promise she’ll have her own child. Because of this, Victoria Robles de Cantú (Leticia Calderón) won’t rule out any actions against Sonia de Serrano (Sandra Kai). She won’t care how he does it, but Eugenio Serrano (Alejandro Camacho) needs to get that baby.

Looks like Elisa made the wrong choice last night to drop Leonardo “Leo” Velasco Rodríguez (Andrés Palacios) and have anything to do with her mother and Eugenio.

She keeps getting so upset that Leo is accusing her family of things, but she herself acted suspicious of them in their company. She pointed out, for one, Eugenio is always there with the last-second save. Not to mention how he seems to have a contact for every occasion.

Finally, there’s some rough times ahead tonight for Leo. He already learned a lot of painful info about José Luis Velasco Rodríguez (Hernán Mendoza). Information that destroyed his relationship with Elisa.

But, wait! There’s apparently much more. Imperio de mentiras spoilers indicate Leo will learn the whole truth about his brother tonight. We honestly can’t see how there could be anything more—or worse—to discover than he already has. Unless, of course, Leo finds what he needs to prove his brother’s declaration false.

This could lead to some serious consequences ahead. If he exposes the truth, he’ll be putting his family at risk. Assuming he has no idea about the threat, and we think that’s the case.

After all, this is the same cop who was so shocked at the recent accusations about his brother. This is after already suspecting him of dirty dealings before, and knowing how he was behaving with their mother and the rest of the family. Hmm. If things don’t work out for him in Mexico, maybe the Salem PD has a spot…

Univision Dulce Ambición Spoilers: Are Jos and Fabiana about to team up?