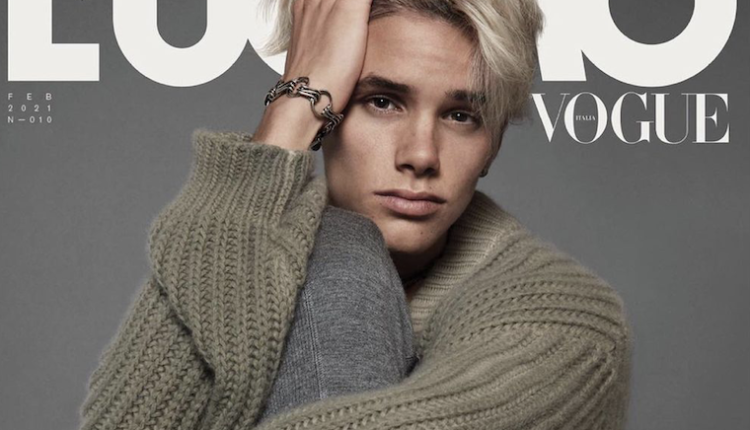 It looks as though David Beckham and Victoria Beckham’s son Romeo is following in their footsteps (and in the footsteps of his older brother Brooklyn Beckham, too) by becoming a fashion model. The 18-year-old is celebrating his first cover for L’Uomo Vogue magazine. Here’s what you need to know.

It might seem like it was just yesterday that David and Victoria Beckham announced the birth of their second child Romeo and now he’s all grown up posing for fashion magazines like the serious and stylish fashionista that he is. Not only did Romeo get his looks from his mother but apparently he also got Victoria’s keen sense of style.

While Romeo covered up in an oversize sweater, trousers and Prada boots for the cover, other shots featured the star showing off his chest and abs as he wore a cropped teal tank top in one photo and an unbuttoned tuxedo vest in another.

Of course, some will be quick to point out the obvious nepotism at play here but it’s been noted that this is the magazine’s ‘Generations’ issue.

Meanwhile, a new report says that Romeo’s older brother Brooklyn is looking to ‘rebrand’ himself as a model after years of the photos he has taken have been mocked by both fans and critics alike. Here’s what you need to know.

According to The Sun, Brooklyn has signed up to be represented by one of the world’s leading fashion managers, Robert Ferrell. He is credited to having helped Kate Moss become a household name for 22 years as well as her fellow supermodels Naomi Campbell, Claudia Schiffer and Eva Herzigova. It also seems as though Brooklyn is looking to follow in the footsteps of his fiancé Nicola Peltz, who also works as both an actress and a model.

A source said: “Brooklyn has a recognisable face now and is in high demand in the fashion world, especially as he’s the son of David and Victoria. He has got one of the industry’s leading names to help build him up and bag him lucrative deals. It’s a promising move.”

‘Young And The Restless’ Spoilers: Fans Are Excited About The Return Of ‘Hurricane’ Gloria Abbott (Judith Chapman)!