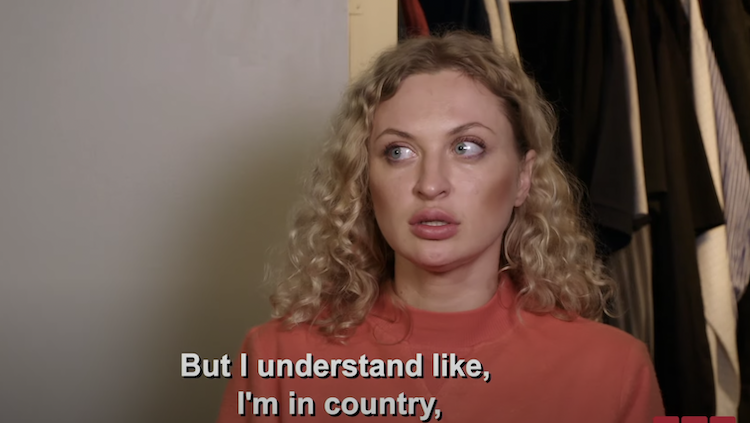 ’90 Day Fiancé’ Spoilers find that it seems that Natalie Mordovtseva’s move to Washington has really changed her mind about being with Mike Youngquist on the TLC hit show.

Things have been very bumpy with the couple and on the spoilers for the next episode, things may get even worse for them. Natalie has shown Mike that his small town life may not be for her. He constantly reminds her that he is still in debt and it is incredibly expensive to live in big cities, like Seattle.

Natalie does seem concerned about Mike’s health though. He eats a lot of meat and drinks, but she is a vegetarian and doesn’t like alcohol. She has started to push him to eat a much healthier diet. Mike feels that she is asking a lot of him because he has had this diet practically his whole life.

He did tell her that he would go a week without eating meat, but then she asked him to stop eating pasta too. She has also asked him to not drink. This could be pushing it for Mike. Mike tells cameras, “She just says some things that are, like, hurtful. Like, how she wants to work on losing weight and stuff. It just seems like it’s a battle, you know?”

The mood just gets more intense when Natalie is looking around Mike’s house and is trying to figure out where he put her engagement ring. He tells her that he won’t tell her where it is.

She tells him, “You acted very different them, from now. Low class?” Mike tells her, “What do you know about low class?” Then she told him, “I live in it now.” She then called him a “low-class drunk man.”

Mike then tells her, “You talk about this class, what class do you fit in? What are you doing?? Why do you put yourself on a pedestal? What makes you better than anyone else?” She then starts to crying and tells him that she is just going back to Ukraine.

She tells cameras, “We don’t respect each other. When we were far away from each other, it was one way, and now that I arrive, and realize he’s like this. And I don’t like how he treat me, it’s not OK. It’s not a happy life, it’s a disaster.”

If you are ready to see what happens next with these two, be sure that you tune in to 90 Day Fiancé on TLC.