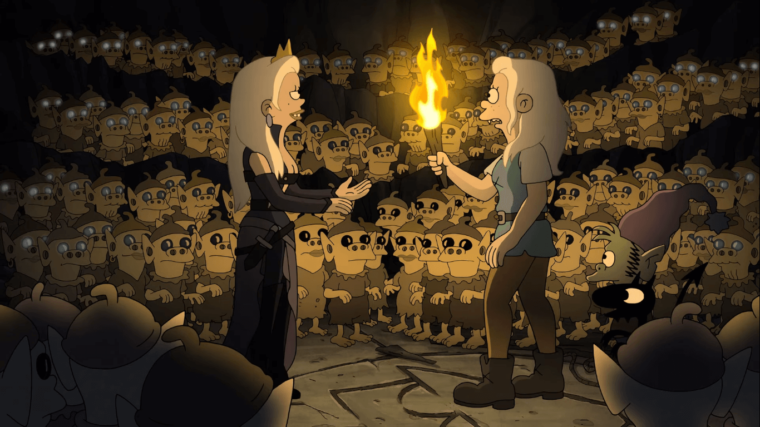 Matt Groening’s Netflix show Disenchantment is returning next year for part three! Disenchantment follows Princess Tiabeanie or “Bean” as her life gets rather exciting after an arranged marriage. According to a summary on IMDB, “Princess Tiabeanie, ‘Bean’, is about to be married to Prince Merkimer. It is an arranged marriage and Bean isn’t too happy about it. She is fun-loving and free-spirited and marriage is the last thing she wants to preoccupy herself with. Then she meets Luci, a demon, and Elfo, an elf, and things get rather exciting, and dangerous.”

It features Groening’s classic cartoon drawing and humor. We’ve lived the modern, blue-collar life with The Simpsons, and traveled thousands of years into the future with Fry in Futurama, now we can go back in time, or, the future again with Bean in Disenchantment and explore new and hilarious characters and problems.

Netflix posted the new promo video of Disenchantment on their YouTube page today, and though it is a short thirty-second teaser, viewers are already excited to know that Groening’s creation will make it’s way into 2020. You can watch the video below.

When we left off in season two, our heroine Bean was tied to a bonfire and set to be burned as a witch with dozens of onlookers. As the flames grow higher and consume our favorite trio of Bean, Luci, and Elfo, the ground gives way and they tumble down beneath to complete darkness.

They are greeted with hundreds of blinking eyes staring at them. In a hilarious moment, they light the area around them and scream with fear and confusion only for the flame to go out. Grabbing another piece of the broken bonfire we find that, “Ah, they’re still here,” followed by more yelling. The ending of season two left us with many questions and had fans dying for a third season. Though it was almost expected that it would happen, we didn’t know when.

The promo video plays with the ending of season two and uses the eyes to display the messages, though a specific date isn’t given we do know that it will come in 2020. Whether it be a New Year’s gift or something a little later, no one knows for certain. Have you been watching Groening’s latest creation of Disenchantment on Netflix? When do you think season 3 will release and what will happen to Bean, Luci, and Elfo?