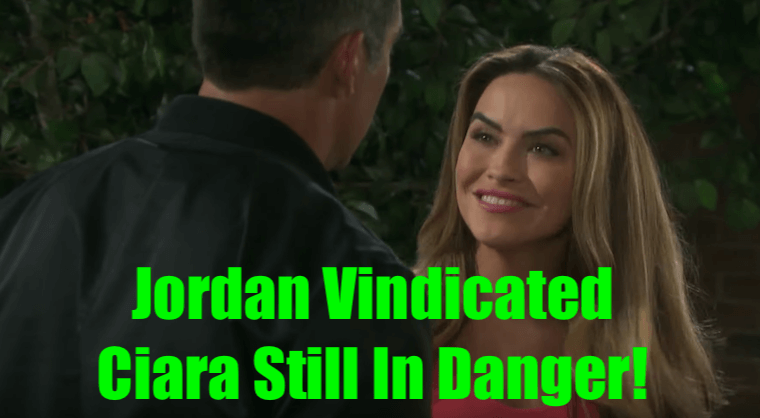 ‘Days of Our Live’ (DOOL) spoilers for Wednesday, October 16th reveal that Nicole Walker (Arianne Zucker) has a lot to think about, Jordan Ridgeway (Chrishell Hartley) is vindicated, and Gabi DiMera (Camila Banus) is distraught. There’s also a change of heart for Victor Kiriakis (John Aniston) and Sarah Horton (Linsey Godfrey) makes a slip. If you missed it, let’s get to your ‘Days of Our Lives’ recap.

‘Days of Our Lives’ spoilers: “We’ll” be fine

At the hospital, Eric Brady (Greg Vaughan) is still reeling from Sarah’s announcement that she’s leaving town. She promises that she feels this is what’s best and that “we’ll” be okay. Oops.

Eric, of course, wants to know what she means by “we”. She explains that she meant her, Eric, Nicole, and Holly. He accepts that explanation and tells her that he wants to be more than just Facebook friends once she leaves. She agrees that their bond runs a lot deeper than that.

Back at Eric’s, Xander Cook (Paul Telfer) is trying to convince Nicole to keep quiet about what she knows. She wants to know something herself. Like what he has to do with any of this. He admits that he is the one who sent Dr. Wilhelm Rolf (William Utay) there in the first place. He didn’t want Sarah to leave town, but he now knows that was a mistake. He begs her not to give Eric the paper, then reminds her she has more to lose than him. Nicole argues that she and Eric are solid.

‘Days of Our Lives’ spoilers: Will she break?

Not long after Xander leaves, Eric returns to the apartment. Nicole had just put the paper in a drawer and closed it when he gets back. He notices right away something isn’t right, and she says she has something to tell him. They get briefly sidetracked talking about Sarah and her decision to move, as well as their second chance to be together. When Eric asks her what she wanted to tell him, she says that “It’ll keep.”

‘Days of Our Lives’ spoilers: Heartbreak

Julie Williams (Susan Seaforth Hayes) is getting her transplant now, meaning that Stefan DiMera (Brandon Barash) is now officially 100% gone. This hits her real hard, and she speaks to God in the chapel. She has now lost the only person that really loved her and wants to know why God hates her so much. Sonny Kiriakis (Fredde Smith) and Will Horton (Chandler Massey) enter and tell her that they have Stefan’s personal effects. She doesn’t want them.

Back at the DiMera mansion, they leave the envelope in the bedroom in case she changes her mind. They promise to be there for her for whatever she needs, but all she needs is alone time. After they take off, she goes into an epic fit over her loss and wants to know why Stefan gave her his heart when he wasn’t going to be there for her.

‘Days of Our Lives’ spoilers: Vindicated

Ben Weston (Robert Scott Wilson) confronts Jordan in town about the incident with Ciara Brady (Victoria Konefal) in the elevator, claiming that Jordan is stalking her. Rafe Hernandez (Galen Gering) wants to know if this is true. Jordan tries to tell him she was just there interviewing for a job, but you can tell Rafe is having doubts. That is, until a call comes in. They matched the tire tracks from the near hit-and-run and traced them to an impounded car. The driver, who was drunk, admits that he almost hit a woman at the Brady’s Pub parking lot. Ben doesn’t know what to think now.

‘Days of Our Lives’ spoilers: I was wrong

At the DiMera guest house, Ben Weston calls Victor and tells him to forget about whatever he was about to do in light of the new information. When Ciara returns, he tells her about the drunk driver and admits that he was wrong. He thinks he has just been paranoid all this time regarding Jordan. Ciara doesn’t blame him for that, then breaks the news about Stefan. He’s heartbroken about the loss of the one person who gave him a job in Salem.

‘Days of Our Lives’ spoilers: Cancel the delivery

After a visit with Ciara where he learns about the elevator meeting between Ciara and Jordan, Victor goes off script. Instead of sending her away like Ben asked, Victor orders her eliminated. He has a man pose as a pizza delivery man who arrives at the Hernandez home.

Before the man can do anything, Ben had called Victor Kiriakis and told him to back off because of the new info. Victor actually decides to take that to heart—for now. He texts the man and has him cancel the delivery. Jordan is confused when the hit man says he got the wrong house, but lets her keep the pizza.