Skip to content
Home > Uncategorized > ‘Days of Our Lives’ Spoilers: What’s Next For Anna & Tony? 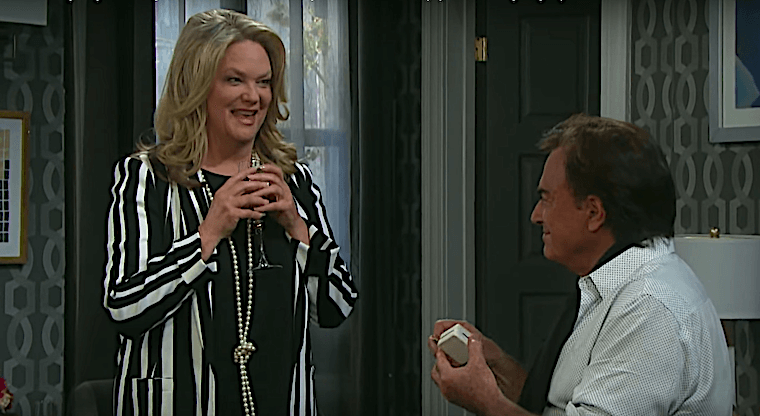 ‘Days of Our Lives’ (dool) spoilers reveal that Brady Black (Eric Martsolf) might be falling into Kristen DiMera’s (Stacy Haiduk) trap, Xander Cook (Paul Tefler) is desperate, Nicole Walker (Arianne Zucker) is nosy, and Kate DiMera (Lauren Koslow) gets an offer. There’s also a bit of a disagreement between Tony and Anna DiMera (Thaao Penghlis and Leanne Hunley). If you missed it, let’s get to your ‘Days of Our Lives’ recap.

John Black (Drake Hogestyn) and Marlena Evans (Deidre Hall) talk to Brady today about Kristen moving into Casa Kiriakis. They’re both concerned about Brady. They think she’s using this pregnancy to worm her way back into his life, and he’s letting her win. They don’t think he should underestimate her. Brady insists that he knows what he’s doing, and he was raised to be the kind of guy who chooses his child over a job.

Famous last words. Well, maybe. It’s definitely looking like the lines between helping his child and getting close to Kristen are getting majorly blurred. When he returns home, he’s got some pre-natal vitamins for her, but he also bought something from GabiChic to keep Kristen warm, because it can get drafty in here. Kristen is touched and things are looking like they could escalate at some point soon. For now, Brady Black keeps his distance, but we’re not sure how much longer that will happen.

‘Days of Our Lives’ spoilers: Think ahead

Speaking of Kristen, Xander had a favor to ask of her in this episode. He needs Dr. Wilhelm Rolf’s (William Utay) number. Kirsten, of course, is curious and wants to know why. This only gets stronger when Xander goes on about how much of a rush he’s in to speak with him. She ends up forcing him to tell the whole story, and Kristen wants to know what’s the big deal about Rolf following through on his promise. Xander admits that he thought better of it and is worried that Rolf will end up outing him as the source when Eric Brady (Greg Vaugh) learns of Sarah Horton’s (Linsey Godfrey) pregnancy. She believes he should have thought ahead, and eventually relents. She actually hands him her own phone, just to ensure that Rolf will answer. It’s not good news…

Nicole is obviously surprised to see Dr. Wilhelm Rolf at the door and wants to know what he’s doing there. When he explains he has something to speak to Eric about, she insists they have no secrets and he can tell her. He doesn’t think so. He’s got some news that Eric will definitely want to know about. He complies with the story about stumbling on info at Casa Kiriakis, but he refuses to say what it is. He is firm is telling Nicole that this is for Eric’s eyes only, then leaves the envelope with her.

Nicole is so clearly anxious to know. As we figured, she ends up opening the envelope and finding out about the pregnancy. Xander, who panicked when he learned the envelope was left, races to the apartment and learns that Nicole’s already seen the contents.

‘Days of Our Lives’ spoilers: Secret out?

As for Sarah and Eric, he happens to be at the hospital to see someone from the Horton Center and bumps into her. He can tell right away something isn’t right. She looks tired and pale, which she explains away as a product of helping remove Stefan DiMera’s (Brandon Barash) heart. She says that the idea of actually ending Stefan’s life via the surgery was hard emotionally, on top of the physical demands. Eric understands.

However, she ends up nearly passing out and now Eric is more in her business. He starts asking about when the last time she ate was, and Sarah can’t remember. Being the nice guy he is, he then orders her to stay put while he gets something for her. He even ends up watching her eat the whole thing to make sure she gets food in her. During all this, Sarah ends up revealing that she is planning to leave Salem.

Eric can’t believe it. He thinks leaving a good job and lots of family to start over in a new place is crazy. Will she tell him the truth? We’ll see.

‘Days of Our Lives’ spoilers: Back to Titan?

Kate is still in the hospital and angry over Tony becoming temporary CEO of DiMera. She thinks this is an insult and she is perfectly capable of fulfilling her duties. When Victor Kiriakis (John Aniston) pays her a visit, she vents to him about the situation. He thinks he has the solution. She’s offered a job at Titan. Kate refuses, and reminds Victor that she will not work under Brady. He’s not planning for her to. He wans her to be CEO. He explains the Brady situation and how Victor is seeing him as a lost cause. Either she gets that job, or he’ll find someone else. She wants a few days to think, but he’s only giving her 24 hours.

‘Days of Our Lives’ spoilers: Anna vs Tony?

Finally, Anna isn’t very happy to learn of Tony’s new temp job. She thinks it’s a bad idea. Every time he gets pulled into the DiMera world, other things slide—including her. Besides that, they have plans this is going to interfere with. He still wants to do it for a couple reasons. One, he wants to prove he can after Kate expressed doubts. Two, he wants to be his own man and make Anna proud.