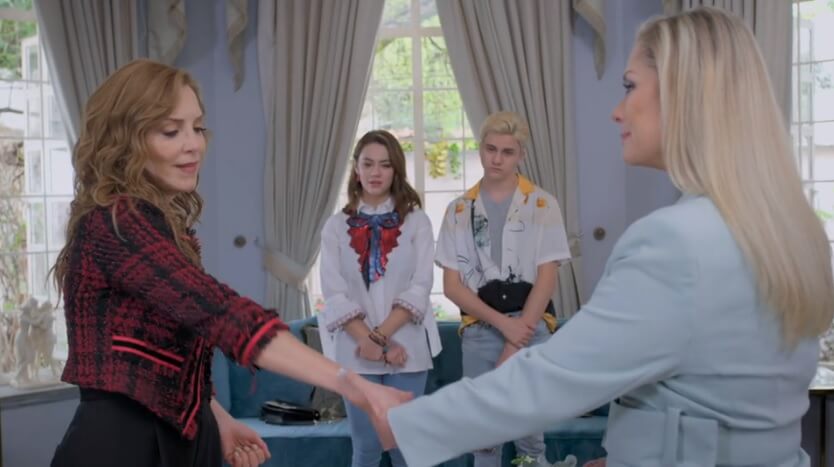 Carlota is busted this week, and gets a lot of hell from Diego Ortega (Nikolás Caballero) and Soledad Elizalde (Laura Flores) for ruining their family. No matter her motives, she’d gone about things the wrong way. Soledad is glad to be free of Ubaldo Ortega (Sergio Sendel), though, and ends up telling him off later. She’s not afraid of him now and she is ready to rebuild her life so she can be happy. She also wants to focus on helping her son after Ubaldo sort of sold him out as well during a big confession he makes to the public.

Dora has a hard time accepting that her brother, Ubaldo, is a bad guy at first. Things change later, after she learns that he had a hand in making sure she never found her son. They get into a huge fight about a family secret that led to her losing her son, which we’ll get to in a minute. For now, she has been told where her son (Collins, played by Marco Zunino) is and reunites with him. It’s a bit of a tense reunion, but they’re going to try getting to know each other.

We’ve been hearing about this dead sister (Flora) a lot of the season, but we learn this week what actually happened to her. It appears Dora accidently killed her in struggle as her siblings tried to stop her from running off with her love, Evaristo Gallego. She had no idea Flora was hurt that bad when she left. She’d returned home eventually with a baby and alone, having been abandoned by the father. He just happens to be from a family that her family hates.

Nora is possibly about to reunite with her own old love, but Dora interferes and hangs up the phone. She keeps going on about sinning and what not. That turns out to be the last straw, and Nora tells her off. She then leaves and tells Nora to stay out of her life.

Aris is invited to open for Tiago (Sian Chiong), but he’s reluctant, especially with everything they all have going on right now. Arquis ends up convincing him their mom would want him to do it, so he accepts.

Aris has a meeting with Amapola “Polita” Casteñeda (Gabriela Platas), who is sad she left them so suddenly and didn’t get to say goodbye. She is going to try to come back as often as she can, but if she can’t manage to do it again, she makes sure Aris knows how important it is to live to the fullest and do what makes you happy.

The plot against Ubaldo is on. Olegario Cervantes (Víctor González) ends up getting him to the spot where Andrés Cervantes (Bruno Santamaría) died. He threatens Ubaldo with a gun to make him confess to being involved in Andrés’ death, but Ubaldo points out that any confession would be useless, as he didn’t actually do it willingly. Olegario is the one who has to worry about a legal problem, as the authorities know the new head of government is missing and hurried to the scene. They take Olegario into custody.

Ubaldo might not be saved so easily from paying for his crimes. Both Cuauhtémoc “Temo” López (Joaquín Bondoni) and Francisco “Pancho” López (Arath de la Torre) end up confronting Ubaldo. Pancho is really upset about how Ubaldo handled the news of the affair with Carlota leaking. He believes that Ubaldo is trying to make himself into the victim and throw a young girl under the bus. Ubaldo denies this and claims he is just trying to be straight forward.

Temo confronts him over similar reasons and quits the campaign. He can’t work for someone like Ubaldo anymore, but he is still planning to be involved in politics.

Eventually, they both do have something to do with him still. There’s the Polita foundation to think about yet. It’s a charity Ubaldo is helping with that will assist children who are now alone in the world. There’s a big event to kick it off, and pretty much everyone is there. Some are planning to use this event as a way to finally expose their less-than-honorable head of government.

El Corazón Nunca Se Equivoca spoilers: They told him so

As for Carlota, she and Elisa were not happy about the idea of Olegario handling the situation with Ubaldo alone. They try to talk him into handling it differently, but he won’t be swayed. He’s ready to protect his family and handle his son’s murderer any way he can, and he doesn’t care what it means for him.

Why Univision is falling short.