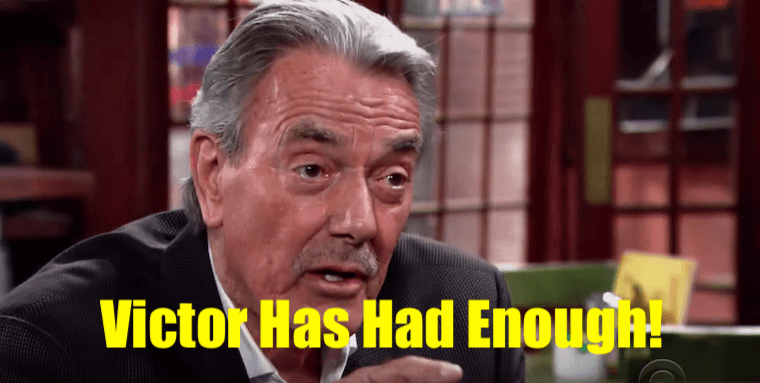 ‘Young and the Restless’ (Y&R) Spoilers tease that Victor Newman (Eric Braden) has just about had enough. Realizing that both his sons Adam Newman (Mark Grossman) and Nick Newman (Joshua Morrow) have taken things a little too far, Victor decides to take control again by neutralizing Adam. Here’s what you need to know.

For Victor, this game has gone on long enough. Head writer Josh Griffith puts it this way to Soap Opera Digest, “Victor feels he has given Adam and Nick enough time to resolve their differences on their own. Victor is concerned that the drama surrounding Christian’s paternity will have a damaging effect on his grandson. Victor also thinks that Adam is using the custody battle as a way to punish Nick, and it will ultimately hurt Christian the most.”

But to complicate matters even more, Victor admits that he loves both sons and wants the best possible outcome for them. But it might not be that easy. Griffith further explains, “This situation brings up unresolved issues from Adam’s childhood of feeling abandoned by Victor which led to Adam feeling like an outcast. He truly loves his sons and does not want a fractures relationship with them like he has with his dad. Victor’s involvement in the custody battle will anger Adam and cause the rift in the Newman family to take a very dangerous turn that no one will see coming.”

With that said, we have a feeling that things are about to get pretty dramatic. Fasten your seat belts folks, because it’s about to become a very wild ride and yes, Victor Newman is in the driver’s seat! Fans will have to tune in to find out what will happen next!

‘Days of Our Lives’ Spoilers: Leann Hunley Opens Up About Anna DiMera’s Return To Salem

CBS ‘The Young and the Restless’ Spoilers: What Happened To Faith Newman…

CBS ‘The Young and the Restless’ Spoilers: Will Victoria Take Billy Back Or Has She…

CBS ‘The Young and the Restless’ Spoilers: Rey And Lola Rosales Left…