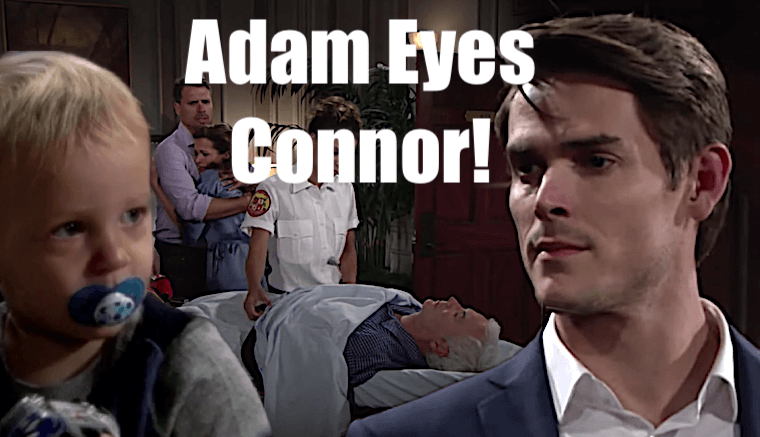 ‘Young and the Restless’ (Y&R) spoilers for Monday, July 8 indicate that Detective Paul Williams (Doug Davidson) will interrogate Chelsea Newman (Melissa Claire Egan) about her new hubby’s death. She will talk about how she went to sleep and woke up and found Calvin Boudrea (John Burke) dead as a doornail. Nick Newman (Joshua Morrow) will be a good guy and offer for her to stay at his place to get away from the hotel suite where Calvin died, and she will accept, much to Adam Newman’s (Mark Grossman) chagrin.

Phyllis Summers (Michelle Stratford) will tell Adam that he needs to lay off and take it easy on Chelsea, she’s grieving and needs some space (you tell him, honey!), but of course Adam will take that advice with a grain of salt. Over at Nick’s place, Chelsea will be reeling from the shock of it all. Nick will then tell her that Neil Winters (Kristoff St. John) died in a very similar fashion. Poor Chelsea will get emotional, because this is the firs time she will have heard of Neil’s death.

Nick consoles Chelsea, only to be rudely interrupted by Adam, who insists upon having a word with Chelsea by herself. Nick will reluctantly leave once Chelsea agrees. Adam, being the king of timing, will tell Chelsea that Calvin’s passing is a gift, and that now they’re free to be together. That is not the thing you say to a woman who’s husband just died, man! Chelsea rightfully gets angry and tells him that her husband’s passing is far from a gift, and that she thinks he’s a backstabber due to his conversation with Calvin from earlier.

Adam tells her that it was all talk, that he doesn’t actually intend on going through with any of his threats but she’ll tell him that instead of being together she’d rather just be on her own. She’s not the same girl anymore. Ouch!

Of course later, Chelsea will agonize over the fact that Calvin’s death may affect Adam’s legal claim to Connor Newman (Gunner and Ryder Gadbois). When she expresses this to Nick, she realizes that she can’t really keep the truth from Connor and will want to go tell him. Nick will want to go with her and be there for her. Later, however, when he goes to get food for Chelsea (because I guess its best not to deliver bad news on an empty stomach) and comes back, he discovers that she’s asleep.

Paul and Phyllis see each other at the park, and Phyllis casually mentions that Chelsea was the one who instigated the fight with Sharon Newman (Sharon Case) at Crimson Lights. Paul is mystified by this and asks why she would be mentioning it just now. Phyllis’s defense is that she saw no need to, because Chelsea wasn’t in town. Detective Pauls’ spidey senses will start tingling, and he will be curious about Phyllis’s vacay, he also wants to know why she’s so buddy-buddy with Adam lately. Of course Phyllis says that this is just because they’ve discovered some common interests lately. Common interests, yeah, right. To throw him off her trail, Phyllis tells Paul that perhaps he should concentrate his efforts on who killed Calvin. He assures her that there was no evidence of foul play at all. Phyllis doesn’t really believe that, though.

‘Young and the Restless’ Spoilers: Phyllis tells Adam ‘Pot, this is kettle’.

She meets with Adam at Dark Horse, and he will express disgust over Nick supposedly making the moves on Chelsea (this coming from the same guy who asked the woman to be with him and her husband not even cold yet, OMG!), thankfully, Phyllis calls him out on that one, telling him that he basically did the same thing. She also tells him that it should be no surprise to him, considering how qucikly Chelsea moved on after he supposedly ‘died’ with Nick, and that she has quite the past anyway and that being with Chelsea will just bring him a lot of disappointment. But is Adam listening? Nope! He wants his family back and he is willing to do anything and everything in order to get it.

Meanwhile, over at Devon Hamilton’s (Bryton James) penthouse, Ana Hamilton (Loren Lott) will ask Nate Hastings (Sean Dominic) for a favor. She doesn’t like the fact that Theo Vanderway (Tyler Johnson) has been hired to look after her. She wants him to try and convince Devon that she is perfectly okay by herself and doesn’t need ‘looking after’ by anyone. Nate thinks she should chill out and just play along with it, and that she should just focus on her personal life.

Summer Newman (Hunter King) will ask for more details on Theo’s night with Ana, but Theo will assure her that they’re just working together. That will send a wave of relief through Summer. She will promise him that she’s done ranting about Kyle Abbot (Michael Mealor), and Theo, it seems, wants to keep doing what they’re doing so they will make up. Awww.

The Young and the Restless Spoilers: Ana decides to grin and bear it

Ana will arrive soon and immediately shut down the crossover plans that involve Jett Slade (Gilber Glenn Brown), this makes Theo feel like she’s got a problem with the whole arrangement. Ana assures him that no, she’s accepted Devon’s decision and she’s hoping that if any other issues arise between them they can just talk it out.

The Young and the Restless Spoilers: Summer’s new offer

Later, Theo will start bragging on Summer and tell her that he’s never met anyone like her before and that he can help build her own brand by being a Jabot Collective Influencer. No word on whether or not she will agree yet, but hey, interesting proposition there. Then afterwards Summer and Theo will head back to his place and hook up. Meanwhile, Nate will comfort Elena Dawson (Brytni Sarpy), because Calvin’s sudden death may have brought back memories from her Mom’s situation and she will need a shoulder to lean on. He assures her that she has people that care about her, and she’ll greatly appreciate it. Aww, sweet guy! Sounds like a full day in Genoa City, stay tuned!!!