‘Young and the Restless’ Spoilers: Victor and Adam Face Off – Did the Prodigal Son Bite Off More Than He Can Chew? 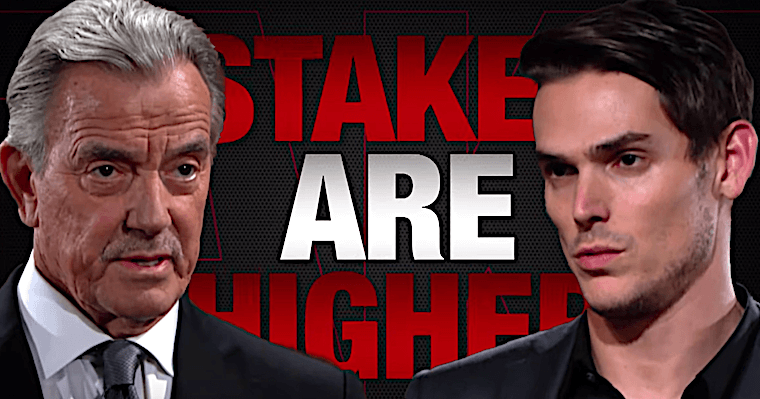 ‘Young and the Restless’ (Y&R) spoilers for the week of June 17-21 indicate that new faces and lots of drama.  This week starts off with Phyllis Summers (Michelle Stafford) breaking away from Kevin Fisher’s (Greg Rikaart) dark room, but most of the week will be focused on Adam Newman’s (Mark Grossman) escalating feud with Nick Newman (Joshua Morrow) over Christian Newman (Jude & Ozzy McGuigen) that will also involve Victor Newman (Eric Braeden). Here’s what you need to know.

‘Young and the Restless’ (Y&R) Spoilers June 17-June 21: Victor and Adam Face Off – Did the Prodigal Son Bit Off More Than He Can Chew?

First, we see Phyllis Summers (Michelle Stafford) breaking away from her captor, Kevin Fisher. She was able to get to Las Vegas where she found out all the information she needed to know about Adam. She will make her way to Genoa City later this week armed for war. Adam is of course hiding many dark secrets and Phyllis might just be his achilles heel at this time since no one else seems to phase him.

This week features Christian Newman as a central figure. The young boy will be seen at the park with his daddy Nick, grandpa Victor as well as his grandma Nikki. Victor, being in a heightened emotional state due to his rare blood disease and probably battling the reality of looming death, will be touched by this scene. The happiness ends here as things then take a turn for the worst. Adam will serve Nick legal papers for full custody!

This will draw the ire of Victor who will demand that Adam drop his case. In a clash of titans at the tack house, Adam will tell Victor off by saying that nobody gets in the way of what he wants – including his own father! Victor will fire back by ordering Adam off his premises, and the tension will be at an all time high. It feels like it was only last week that Victor was betraying Nick and the rest of the Newmans for Adam, yet here we are.

The Young and the Restless Spoilers: Chelsea Sides With Nick Against Adam

Other the Young and the Restless spoilers indicate that Chelsea Newman (Melissa Claire Egan) will come back into the picture this week. A scrambling Nick Newman will give Adam’s wife a call and explain the situation with Christian. Nick will rely on Chelsea’s help in getting Adam to step back, at least momentarily. As leverage in his discussion, Nick will also mention Connor and how Nick may be making a move on that front as well.

But it might not be because of Chelsea’s plea that Adam releases his grip on the custody case; Victor will also attempt to make a deal with Adam. Since he feels he’s likely meeting his end soon, Victor is in desperate need for someone to take over Newman Enterprises. Y&R spoilers tease that Victor offers Adam the position this week. Will it be in exchange for Adam relinquishing his legal case against Nick? Or could it be the opposite, and Victor could offer to side with Adam in the custody battle since he’s so desperate for his prodigal son to take over?

‘Young and the Restless’ (Y&R) Spoilers: Jack’s Love Life About To Get Spicy

Who’s ready for some romance? Apparently Jack Abbott (Peter Bergman) is! ‘Young and the Restless’ (Y&R) spoilers that Jack will see his love life take a turn for the caliente (spicy, that is) in the very near future. His trip with Lauren may be just what he needed to open up his heart one more time. And although the two of them seem to be getting along just fine, it doesn’t seem likely that they’ll form a pair. Instead, it will most likely be with Celeste Rosales (Eva LaRue) that Jack spices things up!

Emotions are going crazy on the Young and the Restless this coming week and we will see Devon Hamilton (Bryton James) having a very tough time coming to terms with Neil Winters’ (Kristoff St. John) death. He still cannot get over it and has to face some serious grief lately. He will start to see more and more of Hilary Curtis once again, which doesn’t help his sanity. Elena Dawson (Brytni Sarpy) is there to help him get through this though and he will need her a lot this week. Stay tuned to see what happens next on the Young and the Restless!

CBS ‘The Young and the Restless’ Spoilers Update: Summer & Kyle’s…

CBS ‘The Young and the Restless’ Spoilers: Tyler Johnson Has Some Very…