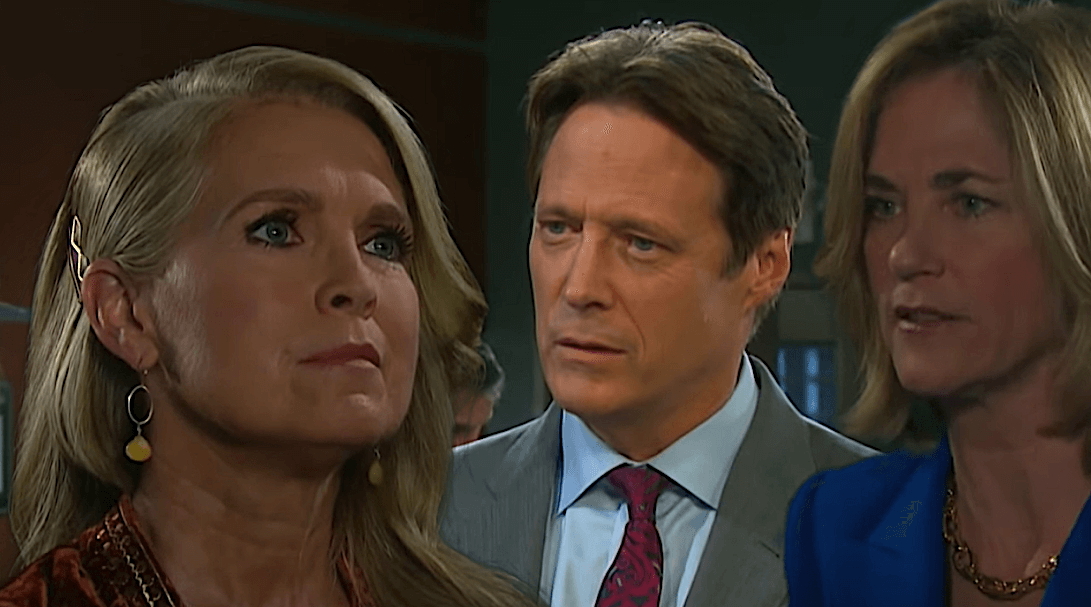 ‘Days of Our Lives’ (DOOL) spoilers reveal a surprise for JJ Deveraux (Casey Moss), a deal between Jack Deveraux (Matthew Ashford) and Will Horton (Chandler Massey), and what may be the beginning of Claire Brady’s (Olivia Rose Keegan) end. If you missed all the action, let’s get to the highlights in your Days of Our Lives recap.

Days of Our Lives spoilers: Let’s make a deal

Jack shows up at Will’s room as suggested to ask about that all-important diary. He just happens to interrupt Will’s honeymoon trip with Sonny Kiriakis (Freddie Smith) in the process, something that they make sure to point out. Of course, given that Will is still hospital-bound, said trip amounts to traveling via different types of food Sonny brings him. Even so, they are less than welcoming to Jack. When he tells them why he’s there, JJ agrees to give up the diary on one condition: all charges against JJ must be dropped. Jack says it’s going to be a little complicated, but he agrees to give it a try.

Later on, he returns with the proof that people in the DA’s office really wanna be on Jack’s good side: he’s already got the paperwork Will wanted. Jack says that each one who helped is hopeful they’ll get the still-vacant DA job. Jack had even dropped by JJ’s place to let him know he was free and clear, for all the good it did in repairing their rift. JJ still hates him. Will agrees to hold up his end and hands the diary over, which Jack wants them all to keep between themselves. Eve is going to be so pleased…

Days of Our Lives spoilers: Baiting the trap

Claire is still struggling bad, and Shawn-Douglas Brady (Brandon Beemer) is noticing—especially after she goes off on him for treating her like a little child. He expresses his concern, but Claire promises she is just upset about her break-up with Tripp Dalton (Lucas Adams) and feeling bad about what she did to Haley Chen (Thia Megia). He promises that everyone makes mistakes, and she’s going to learn from it. He also assures her that he knows she can be the better person she says she wants to be.

Later on, Shawn and Eve Donovan (Kassie DePaiva) cross paths. Without spilling the beans about Claire’s fire habit, she suggests that Shawn stick around town a while. She claims she got to know Claire pretty well during the Bella contest, and thinks that Claire’s missing her parents more than she might let on. Well, at least she’s doing something somewhat intelligent in this whole mess.

Over at the loft, Ciara Brady (Victoria Konefal) is surprised by a visit from temporarily-free Ben Weston (Robert Scott Wilson). Despite his assurances that he saw Claire at the pub with Shawn, Ciara thinks he shouldn’t stick around. It could put their plan at risk. Ben still doesn’t like what she’s doing, but agrees to leave. They’re getting a goodbye kiss in when Claire returns early. Ciara pretends that Ben forced his way into the loft and cries on Claire’s shoulder a moment before making a couple more pointed comments that show she is very much bitter about what Claire did.

What’s their plan? Well, Claire is resting in her room when Tripp returns. After setting the scene a bit, Tripp sets off the smoke alarm, then gets under a blanket with Ciara. Judging by the look on Claire’s face when she sees this, we’re in for another epic fit.

As mentioned earlier, JJ got a visit from Jack that was not very well received. This is especially since, thanks to Shawn’s translation skills, he now knows Haley was actually saying, “I love you,” before she left. He calls Jack out for ruining not only Haley’s life, but his chance to be with the one he loves.

JJ has just been moping post-fight when he gets another knock on the door. This time, he’s shocked to see it’s Haley standing on the other side. Oh, yay. Please, please, please, writers… let’s drop the whole fighting over immigration plot already now. It’s more than made its point, and is just getting tiresome. Also, it’s made jerks out of pretty much every character on both sides. Not fun to watch.