Days of Our Lives Spoilers: Cartel Break Up Ben and Ciara, Is This the End of #Cin? 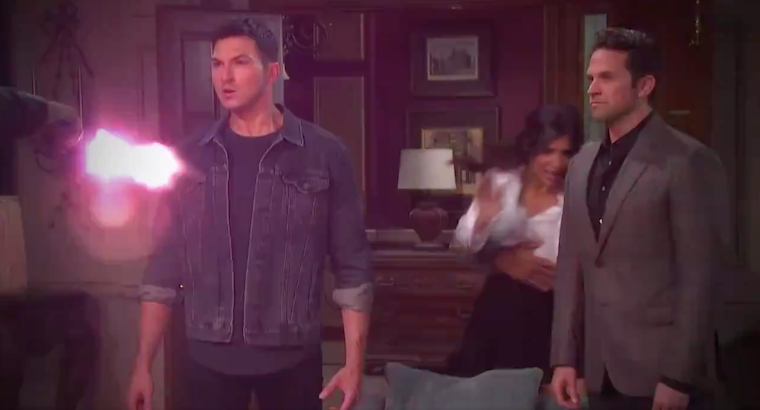 Days of Our Lives Spoilers: Cartel Break Up Ben and Ciara, Is This the End of #Cin?

Lani Price (Sal Stowers) is shocked to learn that Rafe has basically moved back in the family home with Gabi Hernandez (Camila Banus) and brought little David with him. He tells her about the problems they’ve been having, and we are so annoyed because we’re totally able to see Hope’s side of things and this is so not right. To his credit, Rafe can understand where she is coming from as well. He can’t help his sense of responsibility for David, though. A text from Gabi forces him to leave Lani in charge of David a while.

.@Chrishell7 talks Jordan's surprise baby and feelings toward Rafe. Then, @wallykurth, @TheJudiEvans and @freddiemsmith discuss the Kiriakis family dynamic and play a game of “Dish, Dirt or Delight." https://t.co/gmjF3djYuw pic.twitter.com/ZwgQKD3hXf

Meanwhile, Hope is also somewhat confiding in Ted Laurent (Gilles Marini) about the move-out. Pepe doesn’t waste a minute, making it clear to her he would never put someone else’s kids over her. And we’re now rolling our eyes so big. She ends up heading over to the house and finds Lani there. Lani explains what happened, then starts adding her two cents in. Hope is somewhat cold at first to Lani meddling, but seems to calm down when Lani goes on about what a mentor Hope’s been and what an inspiration she and Rafe are as a couple. And we have to take this moment to tell Lani that she needs a new mentor. Like, now. This might be the reason the Salem PD isn’t exactly known for being efficient these days.

Days of Our Lives Spoilers: Cartel attack one

There are two attacks today. One is at the club, where Chloe Lane (Nadi Bjorlin) is complaining about Brady Black (Eric Martsolf) interfering in her business, blissfully unaware that her bodyguards are actually the guys we saw knocked out at the end of yesterday’s episode. Lucky for her, Eli Grant (Lamon Archey) has dropped by to warn her they learned the cartel is on its way and may already be here. She’s freaked, but somewhat confident that she has backup outside.

Eli tells her there’s no one standing guard out there. Almost right away, one of the cartel guys comes in and grabs Chloe. He wants to take her out so he’ll be a big deal back home. Considering he’s got her at gun point, this is looking very bad for Chloe. Even Eli has disarmed at her attacker’s order. They’re saved by Brady, who’s rushed to find her after learning about the threat. He manages to create enough of a distraction to get Chloe free and give Eli the chance to get his weapon and fire. Another bad guy down, but things aren’t over yet…

There is a second attack on the DiMera mansion today. Gabi and Ciara Brady (Victoria Konefal) are caught up in it, which is carried out by the brother of the attacker Stefan DiMera (Brandon Barash) killed. This is a vengeance thing, and he’s not leaving until Stefan is dead. At Gabi’s insistence, Ciara chats up their captor and gives Gabi the chance to send that aforementioned text to Rafe. The man notices and doesn’t react well. At least one of them is going to be his hostage so he can leave town safely.

Meanwhile, Ben Weston (Robert Scott Wilson) and Stefan have hurried back to the DiMera mansion, as Brady didn’t know for sure where Chloe went when she told him off for his lies and stormed away. They’re greeted by a hostage situation. When Stefan learns he’s the main target here, he throws himself on the sword, so to speak. This doesn’t impress their captor, who still needs a hostage to get out of town safely. Ben offers himself up to save Ciara, but the guy laughs at the idea of taking a fit former serial killer instead of a smaller woman. We kind of have to agree here. A former killer isn’t a safe hostage. Ben pointing out that Hope and the rest of the PD wouldn’t give him a moment’s peace doesn’t change his mind. And we’re laughing at the shade Ben just threw at the potential mother-in-law. Eventually, shots are fired and Rafe is injured. While everyone is fussing over the seriously-wounded Rafe, the bad guy runs off with Ciara. This takes Ben’s attention off of Rafe and he hurries after them.

Other ‘Days of Our Lives’ Spoilers

Rex Brady (Kyle Lowder) forces Eric Brady (Greg Vaughan) to look him in the eye and say he’s not in love with Sarah Horton (Linsey Godfrey) after catching them talking. Sarah had been on the verge of possibly getting Eric to admit his feelings before they were interrupted. Sarah explains their chat away by saying that he’d offered to be their photographer.

The Bold and the Beautiful Spoilers Friday, April 19 Update: Hope Pushes Liam To Reunite With Steffy and Kids In France, Willingly Pushes For #Steam Reunion So She Can Get With Thomas?