General Hospital (GH) spoilers impart that that Matt Cohen, who plays Dr. Griffin Munro on the hit ABC soap, is about to exit the show later this. News was leaked by a connected insider in the know that Matt Cohen is parting ways with General Hospital. What that means for his character on the show remains to be seen. Here’s what you need to know.

Things turn on a dime in the soap opera world, and it feels like just yesterday we were pondering the idea of Dr. Griffin Munro having an expanded role on the ABC soap when, all of a sudden, his future seems to lie elsewhere, and away from Port Charles.

To some, this might be a shocker, but to others, this might not b all that surprising. Griffin has had somewhat of a limited role in recent times in Port Charles, so outside of staying status quo there were only 2 ways ABC could go: increase his role, or let Cohen go all together. Seems like the latter was chosen.

Outside of a brief involvement with Kiki Jerome (Hayley Erin) right before her brutal murder at the hands of Ryan Chamberlain (Jon Lindstrom), after he of course dated her mom Ava Jerome (Maura West), the character has largely been lost in limbo.

GH Spoilers: Could Griffin End Up Next On Ryan’s Chopping Block?

It’s unsure as of this time whether Cohen was fired or whether he willingly left the show to pursue other opportunities elsewhere. With that being said, and since it doesn’t look like his character needs to be recast we can see the producers of the show making an example out of Griffin Munro. Could he end being Ryan’s latest victim as the serial killer unleashes his next wave of terror upon Port Charles? Or will Griffin just exit on a whimper, without much ado?

In recent times, characters that have exited the show have done so in pretty spectacular fashion outside of Daisy Kwan (Kelsey Wang) who was given a pink slip and left the show after Shiloh fired her from her position at Dawn of Day. 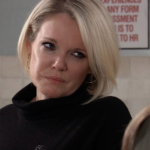 ‘General Hospital’ Spoilers: Laura Slowly Putting 2 and 2 Together With Help From Kevin – Obsession With Ava To Be Ryan’s Ultimate Achilles Heel

‘General hospital’ Spoilers: Could Cohen Be Lining Up For Going Back To SuperNatural?

A quick glance through Cohen’s recent twitter history uncovers a bunch of retweets from actors playing on, as well as from the show “Supernatural”. Does this mean there could be something in the works there? It’s very possible Cohen was given an opportunity there and he saw the writing on the wall for his character Griffin on General Hospital and decided to make the switch. In the world of social media where everything is scrutinized to the nth degree, retweets are very seldom just acts of randomness. But we’ll just have to wait and see until we get more information on Cohen’s future plans.

The World Says Goodbye To The Young and the Restless Star Kristoff St. John (Neil Winters)