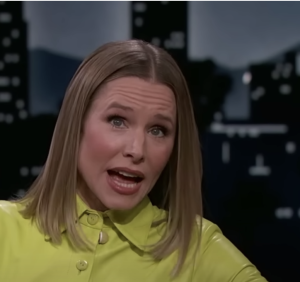 Kristen Bell got candid with her children when it came to her experimenting with drugs.

The actress is a mother to two children which is why her life lessons could teach the next generation over the dangers of using drugs. And as part of that process, she admitted that she informed her kids over her use of hallucinogenic mushrooms on her 40th birthday.

But rather than this having a positive impact, it backfired to some degree. Kristen’s mother had arrived, and when her kids talked to her mother about the mushrooms, the former wanted to try the mushrooms.

That is when Kristen intervened to put her mother in line. In her comments, Kristen said: “I was like, ‘Uh-oh, uh-oh, uh-oh. “For some reason, I’m more worried about telling my mom that than telling my daughter.”

There were serious reasons for Kristen being frank, though. Her husband, Dax Shepard, is currently trying to get over his issues with alcohol. That has made this conversation with her children even more paramount.

And if the couple can manage to teach their children the dangers of these things through their own experiences, then they are more likely to heed the warnings. Kristen’s following comments confirmed as much: “Their dad is in recovery.

“So he’s really honest about what alcohol does to your body, how it makes you feel funny and impairs things. What drugs do to your body and why most drugs are illegal and all that.”

The fans on social media, though, had a different take on the matter. A certain subset of people felt that perhaps this was not the best possible thing for Kristen to do since the children may not have taken her words seriously. One person wrote: “So is bad parenting her go to?”

Ultimately, parenting is not an exact science which is why Kristen could have gotten criticism either way. So there you have it folks. What did you think about this? Let us know your thoughts in the comments section below.