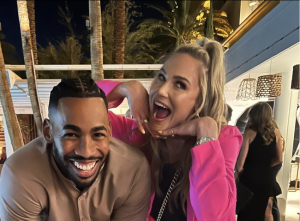 Real Housewives of Orange County: Meghan King Is Not Dating Mike Johnson Despite Going To A Strip Club Together

Speculation emerged that they may have been romantically involved after they were spotted together in Las Vegas. It is claimed that the outing was organised by the producers of Meghan’s podcast, as they met at the iHeartRadio Music Festival and discussed relationships.

But that was apparently accompanied by a visit to a strip club. And by the looks of it, things got very steamy indeed. In the video here, we can see that Meghan is sitting on Mike’s lap as they watch a stripper giving a lap dance. Meghan throws money at the stripper, as Mike and Meghan even share a kiss.

Despite appearing very intimate, sources deny that there is anything romantic. A source confirmed the following: “They had a lot of fun together and are glad to know each other now. But as far as a relationship goes, it’s platonic.”

Nevertheless, those comments have to be taken with a pinch of salt for the following reasons. First of all, the interaction between the pair looked more than just platonic. The fact that they kissed each other and were very touchy is not something that people would usually do unless there were feelings.

Secondly, the fact that Meghan shared the experience on Instagram spoke volumes. In the picture here, we can see the pair posing for a selfie. They have massive smiles on their faces and could not be any happier.

The post was captioned by the following comments: “Look who I found at @iheartradio festival in Vegas! @mike_johnson is my new fave!” Time will tell whether there is anything romantic that could develop between the pair, and based on what we have seen so far, there is a potential for something to happen.

We will have to watch this space going forward. So there you have it folks. What did you think about this? Let us know your thoughts in the comments section below. If you liked reading this article, then check out our other features on the Daily Soap Dish.