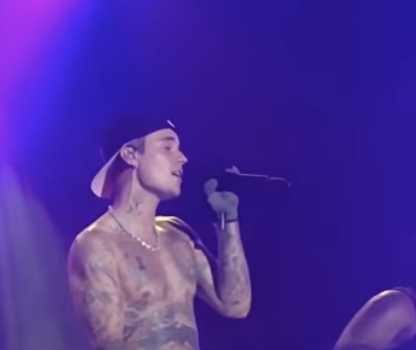 Justin Bieber appears to have put his Ramsay Hunt Syndrome behind him as he performed in Budapest.

This performance was part of his world tour that was back in action after having initially been impacted by the disorder that left his face paralysed. But that all seems to be in the past, as Justin gave fans a signature performance of his hit songs.

In the pictures here, we can see a topless Justin performing confidently in front of the crowd. With that being done, Justin thanked the crowd and his fans who stood by him during his dark times.

Aside from just being happy to be out on stage, Justin also took some time out to speak on another matter that was on his mind: racism. It is no secret that Justin is able to command a fan base that is made up of people from a diverse range of backgrounds.

While that does have the danger of sometimes creating overzealous fans, he wanted to reassure people that everybody was welcome at his concerts.

His following comments confirmed as much: “The Justice Tour is about equality, it’s about justice for all no matter what you look like, no matter your shape, your size, your ethnicity – we’re all the same and we are all one. We know that racism is evil and we know that division is evil.”

It is great to see Justin in a much better place, and hopefully going forward, things continue to stay that way. So there you have it folks. What did you think about this? Let us know your thoughts in the comments section below.