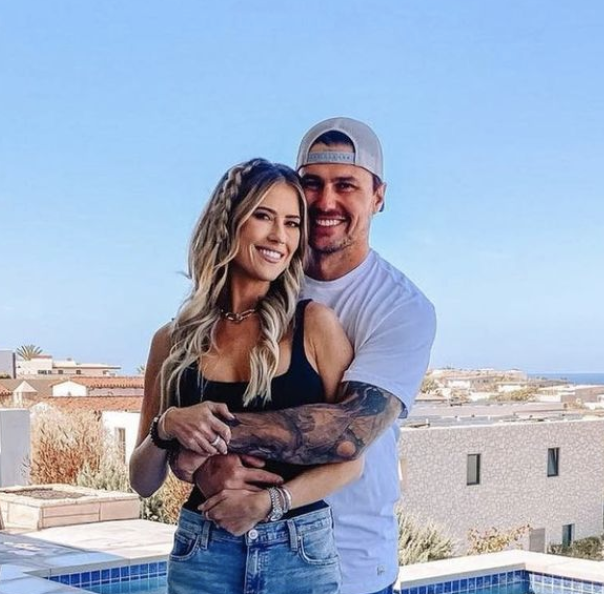 Christina Hall could not help but marvel about her husband Joshua Hall.

The pair turned heads when they decided to hook up together shortly in the aftermath of Christina finalising her divorce from her ex-husband Ant Anstead. That was one thing, but it became an entirely different matter when the pair confirmed that they had secretly gotten married.

But any chances of the relationship becoming smooth sailing from thereon were dampened when Ant decided to file a custody order against Christina for their child Hudson.

This was on the grounds that he felt she was not doing enough in her co-parenting by claiming that she had only seen their child on average for 9 days a month over the last 20 months.

And yet, through it all, Joshua stood by her side. And that is something that she is grateful for. In a post to her fans on Instagram, Christina shared a picture of the couple embracing each other as they stood via a pool.

They have massive smiles on their faces. The post was captioned by the following comments: “May has never been a great month for me. Not sure what that means astrologically or spiritually but I’ve had some of my worst times in May.

“The difference is this May I have a man who treats me with unconditional love and respect. Standing by me and helping me through these times.” Another thing that has helped is the fact that the custody order which Ant was pursuing was dismissed.

While it is not exactly clear if this is going to be the last of it, one thing for sure is that Joshua will back her all the way. After all, he did speak glowingly about her in response to the order being filed. With that being said, Christina could not be in a better place.

She added: “If you have a person who loves and respects you hug them extra tight tonight because trust me not everyone has.” So there you have it folks. What did you think about this? Let us know your thoughts in the comments section below.