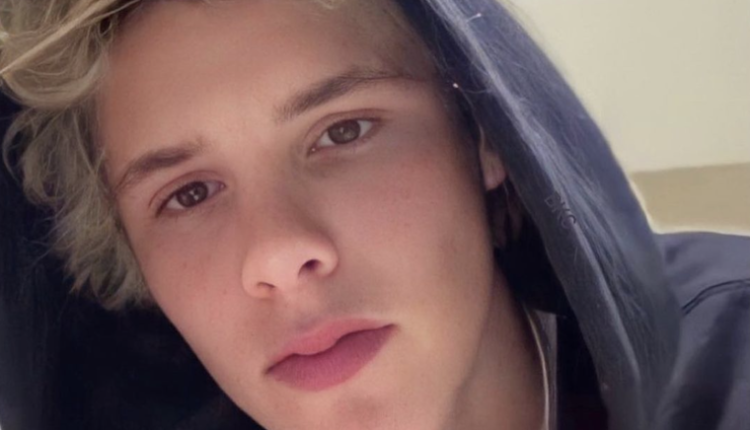 David Beckham and Victoria Beckham are keeping rather quiet despite the fact that their teenage son Cruz Beckham is making headlines for selling a used and worn hoodie for a whopping $150,000.

And while there certainly are a lot of kids who sell their clothes online, many critics believe that Cruz should be giving this kind of amount to a charity in need rather than pocketing the cash for himself. Here’s what you need to know.

While a lot of people might sell their used goods for less than the amount that they purchased it, the celebrity and Hollywood privileged have once again proven that they are in fact in a league of their own.

Cruz went on his friend’s @SneakerBratz account to auction it – with a whopping $45,000 open or a $150,000 buy-it-now price, despite part of the hoodie string missing.

The one-of-a-kind hoodie has the Supreme logo emblazoned across the middle of the chest, while the infamous LV logo is plastered all over the rest of the material.

The sweatshirt was a personal gift to Cruz from fashion designer Kim Jones, 47, when he was artistic director of Louis Vuitton. Sharing snaps of the teen wearing the jumper, Sneakerbratz writes: “1 of 1 supreme Louis Vuitton Box Logo. Used, missing one string attachment.”

Needless to say, it didn’t take very long for the internet to comment on the matter. Many were unimpressed and wondering why the young teen wasn’t donating the money to charity.

Some comments included, “Could have done a charity auction.. kid got it for free.. not like he needs any more money lol.. then at least there would be a reason to buy this. Couldn’t have costed more then a couple hundred bucks to make if that these 2 rich boys boutta make a bag off a gift lol.”

So far neither David and Victoria Beckham haven’t made any comments about the matter despite all of the criticism Cruz has received online so far.

Brooklyn Beckham Wants To Be A Supermodel, Do David & Victoria Beckham Agree?