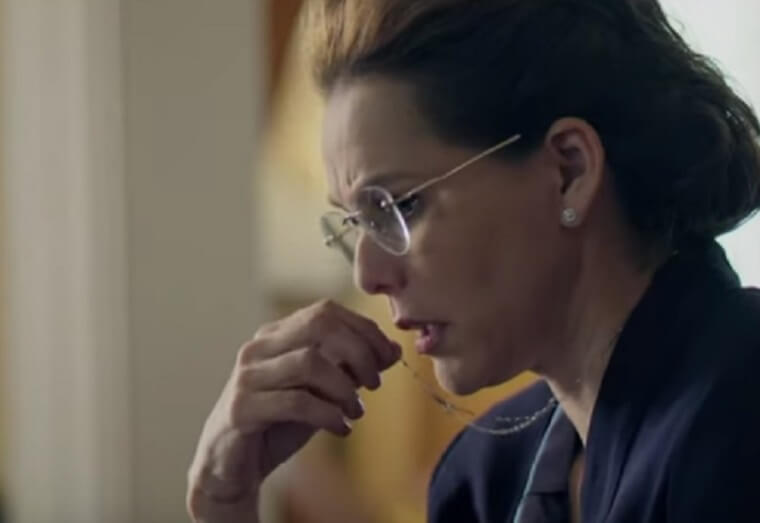 Telemundo La Doña spoilers reveal Romelia Vega (Kika Edgar) is a strange, contradiction of a character. We met her this season, and she’s quickly become a big part of the show. Besides her involvement in a revenge scheme, she’s also inserted herself into another story. Here’s what you need to know.

Her biggest role this season was as a relative of a Monkey, the group that killed Altagracia Sandoval’s (Aracely Arámbula) parents and boyfriend. Altagracia killed them all, except for one. These relatives are all after her. Although, she seems more worried at this point about money than revenge.

Earlier this season, she betrayed her group by conspiring with Mauricio Preciado (Alberto Casanova) to give Altagracia her daughter back. For a price, of course. They wanted that reward money. But things have taken a weird turn with her.

She inherited her brother’s escort business, and it’s apparently not doing well. That’s when she decided to get involved in even shadier dealings.

La Doña spoilers indicate she’d learned of the sleazy world of snuff films. At first, she seemed repulsed by the whole thing. However, it didn’t take her long to dive headfirst into this world. She bought a bunch of the Rainbow killer videos. However, that wasn’t enough. There’s demand for more, so she blackmailed Lucho Navarrete (Bernardo Flores) into making another one. This didn’t have the same value, however, because he didn’t include the Rainbow trademarks. When Romelia’s buyer wanted something more authentic, she called Lucho back and demanded he make another video. This time, with all the Rainbow earmarks. So, what’s up with this strange lady?

While La Doña spoilers implicate her in a revenge scheme and snuff films, there’s more. She was more than willing to let Mónica Hernández (Danna Paola), an innocent woman who didn’t even meet her mother until after the Monkey revenge scheme was already in full gear, suffer. Mónica didn’t know much of anything about Altagracia, nor was she raised by her. She even suggested killing her at one point, before changing her mind. She also was involved in an attack that wounded her co-conspirator. But there’s a different side to her.

Hiding all this darkness is prissy outfits and a perfect ‘do. She raises a couple of kids, and drills them in learning the bible. While helping with their homework, she’s secretly texting about her illegal dealings. And she reminds one of an almost grandmotherly type as she looks at her phone through glasses pushed down her nose. It’s such a strange mix that we find ourselves fascinated by her. But we don’t think she’s long for this story.

Obviously, her biggest problem right now is Altagracia. She is positive all those relatives who testified against her are in one the events that led to her daughter’s death. And once Altagracia gets something in her head, she won’t let it go. With her determination, her partnership with Eunice “La Felina” Lara (Maricela González), and José Luis Navarrete’s (David Zepeda) backing, it’s only a matter of time.

Her other problem is the new videos. Lucho isn’t pleased at the blackmail. He’s even less happy about performing like her trained dog. He already knows who is behind this and that they have an accomplice. He won’t just sit back and deal with this forever. Eventually, he will find them and make them pay.

Telemundo La Doña Spoilers: Lucho wins a battle, but will the war be his?