El Final del Paraíso spoilers reveal that Aurelio “El Titi” Jaramillo (Gregorio Pernía) has been worried about Catalina Santana (Carmen Villalobos). He has had many opportunities to kill her over the years, but his wandering eye always comes back her way. Catalina herself has been drawn to him more than once. But can he ultimately be trusted? Here’s what you need to know. 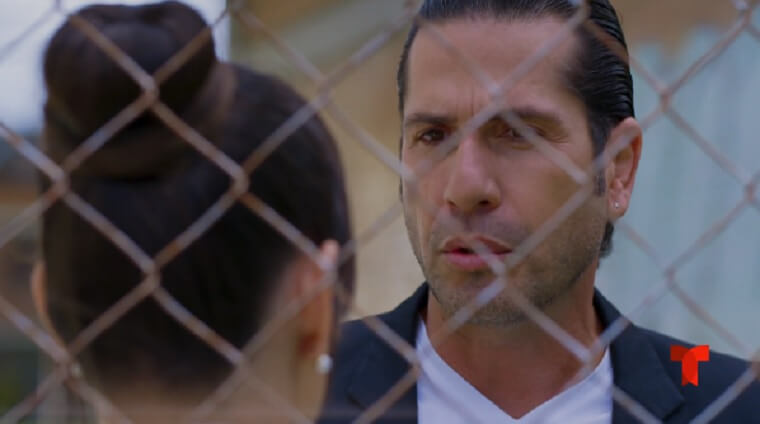 Titi is no stranger to making enemies. Obviously, a drug dealer who’s been around for decades is going to have a lot of people hunting him, on both sides of the law. But Titi creates enemies. He has no loyalty, especially with the women. At least a guy has to usually do something to him first.

In this case, he’s making enemies of Cuina (Jimena Galvis) and Armando “Cardonita” Cardona (Julián Trujillo). In the Wednesday, November 6th episode, he disappeared from the place they’re hiding out in. This obviously infuriated the blood-thirty Cuina. She wants Titi found now.

Where was he? Well, he decided to pay a visit to Cata Grande. He’s been worried in recent episodes, as Cuina wants her head. When it comes to the business, nothing will make Titi do an about-face faster than Cata Grande’s life being in danger. He decides it’s time to reveal he’s alive.

To do this, he takes the place of Cata Grande’s driver and takes her to a remote location. And we’re stunned at the level of security in place here. Seriously? Step it up, DEA. Anyway, when she questions where they’re heading in Wednesday, November 6th episode, he turns and shows her his face. She’s stunned and horrified. She watched him get buried. When Titi tries to tell her they have things to discuss, she makes a run for it.

Titi manages to catch up with her and corners her. He reveals that Cuina and Cardonita want her dead. He’s here for more than a warning, though. He wants to make a deal. He’s willing to hand over Cuina, Cardonita, and the brain behind XY4 and XY5. Cata thinks that’s a pretty good deal, but seems a bit surprised by his return favor. He wants her to give herself the chance to love him.

We know Titi has been obsessed with Cata Grande since the No Hay days. He even once threatened Yesica “La Diabla” Franco’s (Maria Fernanda Yepes) life if she didn’t get Cata Grande out of a narco’s bed. However, we’re not sure he’s built to be a one-woman guy. He’s been too flaky there. Plus, it’d look really weird for a DEA Chief to be shacking up with a narco. He may not technically be any part of a cartel now, but how long will that last? Titi hasn’t known any other business, literally his whole adult life. Even when he was released from jail in season one of Si Hay, he couldn’t abide by the conditions. He went right back into the business, and has had aspirations of becoming the best of the best. We think this pairing will be doomed from the word “go”.