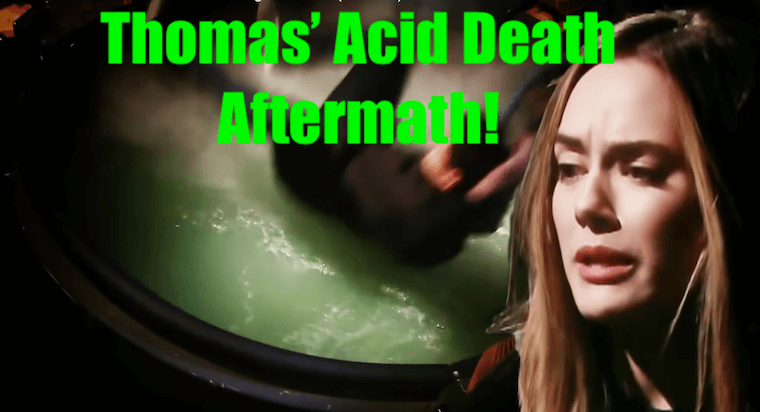 ‘Bold and the Beautiful’ Spoilers: LA or Westeros, you decide!

‘Bold and the Beautiful’ (B&B) Spoilers finds that we never thought we would see the day when we actually cringed in sympathy when Thomas Forrester (Matthew Atkinson) died at the hands of Hope Logan (Annika Noelle) after being pushed in the acid vat on Friday, November 8. Usually when it comes to soap deaths, especially soap villain deaths, they’re usually pretty well warranted and invoke a sense of “HAHA YOU GOT YOURS!” in all of us when it happens, but I have to hand it to Thomas Forrester (Matthew Atkinson) who somehow made me hate AND feel sorry for him at the same time. That takes talent!

‘Bold and the Beautiful’ Spoilers: Feel the burn

We all knew something bad was going to happen when the big vat of hydrofluoric acid was introduced. It was theorized that someone was going to take a hot bath. Lots of people thought it would be Charlie, Hope, or even, God forbid, little Douglas! But Nope! After signing the adoption papers stating that Hope was his legal Mom, Thomas took a final dip. He leaned in to kiss Hope for a final time and that is when she pulled away from him causing him to slip and fall into the boiling vat below.

‘Bold and the Beautiful’ Spoilers: The bitchslap heard throughout the afterlife

I’m sure that Hope is horrified but at the same time, I’m sure that on some horrible level she is relieved. Thomas would simply not give up on the idea of a future with them together and that ended up being his downfall. Even in his final moments when he could have just controlled his hormones and gently led Hope back to the office or better yet just told her where on earth little Douglas was he chose to lean in and try to kiss Hope and that is how Thomas Forrester entered the afterlife. One can only imagine the greeting that poor Caroline gave him the second he got there, I’m pretty sure that was an 80’s Dynasty-level bitchslap.

‘Bold and the Beautiful’ Spoilers: What if Thomas Is not dead?

There is a chance, albeit slim, that Thomas is not dead yet and he’s just simply frying like a like a bucket of chicken at KFC. In which case… how on earth is Hope Logan (Annika Noelle) going to help him? I mean arguably she could just walk away and pretend nothing happened but I am pretty sure that the security cameras at Forrester Creations would have something to say about that. Also everyone’s going to notice when Thomas doesn’t show up for work ever again so walking away isn’t really an option. Is she going to try and fish him out of the vat? Get someone else to throw a line in? Dump it out and hope that the acid doesn’t eat through the bottoms of her shoes to her feet and have her walking away with bloody stumps, Simpson style? I mean how exactly does one even begin to rescue someone from that?

‘Bold and the Beautiful’ Spoilers: If Thomas Is not dead then what happens next?

Well it looks like the acid didn’t do anything to Thomas’s face so we can’t have a Phantom of the Opera story line anytime soon. Aside from a lot of physical therapy and a lot of painful skin graft surgeries I’m not sure. Or perhaps Thomas could don a red latex bodysuit and gain some epic fighting abilities and become the new deadpool! I mean, it could happen, he does pump iron. Or did. RIP Thomas, we knew you and we loved to hate every part of you.