‘Days of Our Lives’ Spoilers Thursday, August 1: Fists Start Flying As Eric Seething Red With Brady Over Involvement With “Nicole”! 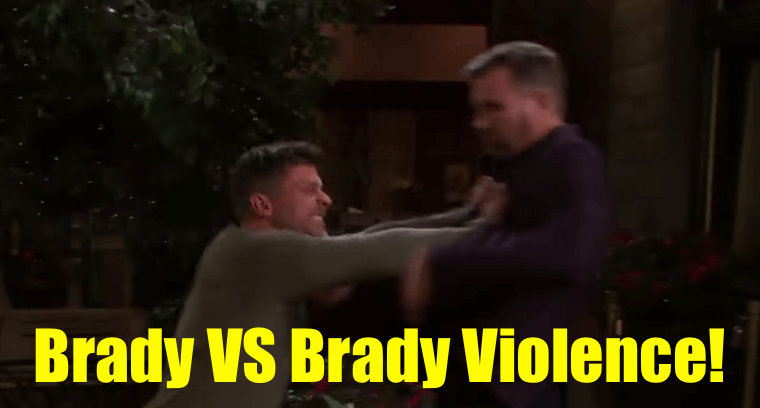 ‘Days of Our Lives’ (DOOL) spoilers for Thursday, August 1st indicate that Eric Brady (Greg Vaughan) will be shocked out of his gourd when he finds out that ‘Nicole Walker’ (Arianne Zucker) has married Tony DiMera (Thaao Penghlis). Eric feels betrayed by Brady Black (Eric Martsolf) because he feels like, as family, he should have talked ‘Nicole’ out of such a crazy decision. Brady will try and explain himself but Eric will think that even ‘Nicole’s’ reasoning is way too far out and stupid in this instance.

‘Days of Our Lives’ Spoilers Thursday, August 1: Fists Start Flying As Eric Seething Red With Brady Over Involvement With “Nicole”!

Eric will get insulted and start throwing insults at Brady, who simply points out that ‘Nicole’ is an adult and she can make all of her own decisions. Eric won’t like this and that’s when the fists will start flying. Meanwhile, looks like things between Sarah Horton (Linsey Godfrey) and Rex Brady (Kyle Lowder) are heating up – until they aren’t anymore. Sarah accidentally blurts out that she loves Eric!!! Wow, what a humiliating way for your relationship to die!

Meanwhile, Hope Brady (Kristian Alfonso) won’t be able to shake the feeling that our boy Ted Laurent (Giles Marini) isn’t telling her the whole truth, so she’ll be over at his apartment ‘investigating’ (AKA: Snooping!), but that doesn’t really resolve her questions, in fact it only leads to more. Apparently Ted is all about the Benjamins! Judging from the amount of cash in his apartment. But if he answers Hope’s questions about where it came from truthfully, then she’ll know that he had a hand (a rather large one at that) in the Holly Jonas kidnapping/faked death plot. So even if he does come clean… he’s going to lose Hope.

Days of Our Lives Spoilers: Battle of the Brides

Meanwhile, it’ll be a tough decision for a certain Mr. Shin (Michael Hagiwara) over at DiMera Enterprises. He was all set and ready to hand the keys to the kingdom to Stefan DiMera (Brandon Barash) and his new bride, Gabi Hernandez (Camila Banus), but then ‘Nicole’ walks in with her new husband Tony DiMera, and upsets everyone’s apple cart. So, who’s going to be the next phoenix? Looks like there may be, at the very least, a war of words between the two couples. Stay tuned!!!

‘General Hospital’ Spoilers Thursday, August 1: What Exactly Is Cassandra Pierce Up To?