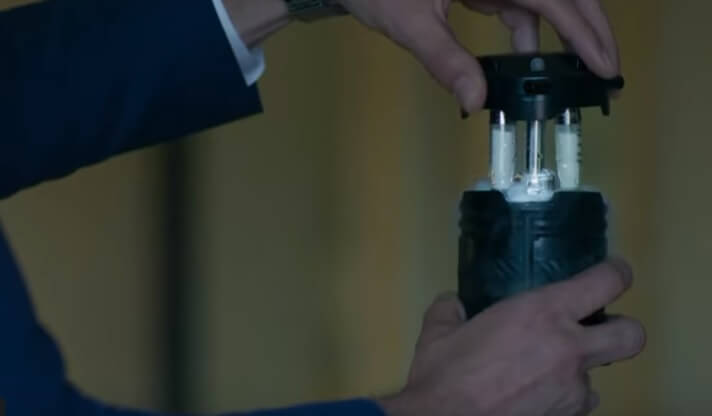 Cayetana follows through on her word today, as she heads to the police station to confess she murdered Juan (Pol Monen). She claims to have gotten a call that Paloma Aljarafe (Agata Herranz) was being attacked. She claims to have driven herself there with Rocío Aljarafe (Sara Vidorreta), leaving Rocío in the car while she went inside. She says she witnessed an attack and jumped to Paloma’s defense, then the girls were both gone. She says she takes full responsibility for the entire thing, and denies the witness claims it was a younger girl. It was dark, after all, and not easy to see anything. Wow. We’re impressed. She actually stood up for them and has learned something.

As for Genoveva, she’s still having a hard time wrapping her mind around the idea her own brother is a murderer. Epifanio swears that every word said about Alejandro is true. She wants him to at least keep an open mind about things, so Epifanio eventually agrees to a meeting.

Genoveva sneaks Epifanio out of the house by hiding him in the trunk area of her SUV and drives him to a rental car that he is planning to take to his meeting with the duplicitous cuñado.

Meanwhile, Teresa Mendoza (Kate del Castillo) is still holding Danilo Márquez (Emannuel Orenday) hostage as bait for Alejandro. She sits down with Danilo and swears that she feels bad for what she’s doing and proceeds to tell him that he has gotten himself mixed up with a monster.

Danilo is obviously a bit surprised by all this and denies that his man is what she claims. She’s planning something to prove it.

As his man is getting some harsh truth, Alejandro is freaking out. He’s meeting with Christian Núñez (Anibal Navarro), who’s pressuring him about this whole eliminate Epifanio plot. He thinks that is top priority and everything else can wait. Alejandro begs to disagree, but Christian puts his foot down. This plan has to finish. He needs to meet with Epifanio and infect him with a substance the Russians developed so he’ll die suddenly a few days from now of “natural causes”.
Alejandro eventually relents, but only after swearing that the team after Teresa better bring Danilo out of that alive.

At la carcel, Faustino Sánchez Godoy (Lincoln Palomeque) is learning a little history, along with Anton (Dimitry Anisimov). A fellow prisoner overhears Faustino mention the name that was Oleg Yasikov’s (Antonio Gil) cryptic message. It apparently referred to a famous helicopter-aided escape, one that made the escapee a hero.

When the helicopter arrives as planned, it seems Oleg bribed someone, as did the previous escapee and helpers. As Faustino and Oleg strap themselves to long wires that bring them to freedom, a guard (just like in the story they were told) orders the other with him not to shoot. Now, they’re free and ready to help Teresa. And in Faustino’s case, to marry Rocío.

While all that is happening, Zurdo Villa (Flavio Medina) hasn’t forgotten what was done to him. Nor has he forgiven. In fact, he’s resting in a new hideout when he suddenly thinks of the Dry Cleaner’s that they found Teresa in. He wants them to hit the place again in hopes of getting his enemy.

Bad move, Zurdo. There are two operations going on tonight, and he’s caught up in one of them, thanks to Teresa. See, when she’d set up a meeting with Alejandro, she’d specified that dry cleaner’s. She also specified no company, but like

Alejandro was going to listen. As planned a military op is carried out that ends up taking out Zurdo, while also putting a serious hurt of the DEA people that were part of this. Christian, obviously, was part of the mission and realizes they’d been duped.

Teresa, Danilo, and co. are actually at the location Alejandro planned to meet Epifanio at to carry out the delayed assassination. Teresa doesn’t miss a chance to call Alejandro’s priorities out, or get control of the situation. Soon, not only is Alejandro on the ground and weaponless, but they also find the substance that was supposed to be used on Epifanio. Oops. Looks like someone’s out of lies.

‘Days of Our Lives’ Spoilers: Gabi Gets Her Way, Tricks Stefan Into DiMera CEO!