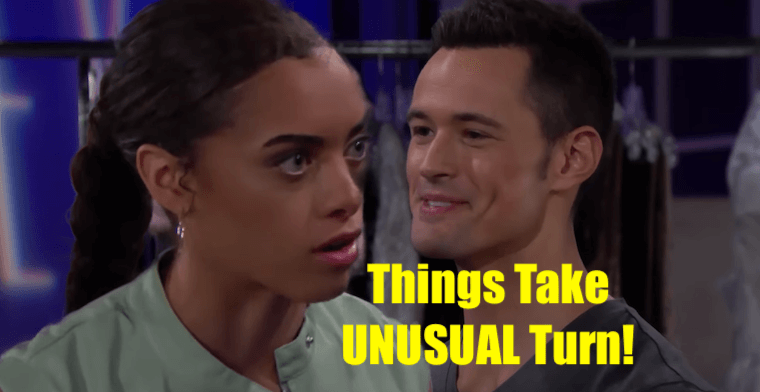 ‘Bold and the Beautiful’ (B&B) spoilers tease that what if Zoe Buckingham (Kiara Barnes) and Thomas Forrester (Matthew Atkinson) got together. Now, we know what you’re thinking, “Thomas is in love with Hope!” yes, but Hope Logan (Annika Noelle) is not in love with him. Hope sees her upcoming marriage to Thomas as a business decision and nothing more. She just wants to move forward with her life as a married woman and be a Mom. However she feels she can’t do that with the love of her life, Liam Spencer (Scott Clifton), since it looks like Liam moved on within a split second after the ink was dry on their annullment papers with ex, Steffy Forrester (Jacqueline MacInnes Wood). So she’s decided to choose what she feels like is the next best thing… Thomas. Here’s what you need to know.

‘Bold and the Beautiful’ Spoilers: Strange Bedfellows – or how Zoe and Thomas might get together

But, psycho as he may seem, Thomas has feelings too. Sooner or later he’s going to realize that no matter what he does, he’s just not going to replace Liam in Hope’s heart. Now, that may prove deadly for Hope, if he decides to go full-on psycho and be all “If I can’t have you, no one can.” but, let’s go down a different road for a second. Let’s pretend that Thomas has a rare moment of clarity and realizes that no, he cannot truly have Hope. And maybe, just maybe, for the sake of his son, who’s suffered enough heartache in his young life, he wouldn’t want to cause him more pain by getting rid of the new “Mom” he’d come to know and love. Thomas becomes sad.

Meanwhile, Zoe, has been having boyfriend problems lately. Xander Avant (Adain Bradley) is determined to tell someone about the whole Baby Beth adoption scandal, and she has really lost favor with him. At first he was willing to keep her secret because he loved her enough not to allow her to go to jail, but now it’s no longer a case of love. Now it’s a case of Xander is tired of being mixed up with a girl who seems to be completely callous and self-serving. It’s only a matter of time before Xander breaks up with Zoe. Zoe is sad.

Now we come to the part that’s pure speculation. What if, one night, Thomas and Zoe met at the Bikini Bar, both were by themselves, sad and alone, and traded stories. Thomas laments that he will never truly be the man for Hope. Zoe laments that Xander is going to rat her out and that orange is not really her color. Both lean on each other. This scenario could also involve conspiring against Xander to bump him off, or otherwise get rid of him as a ‘problem’. Thomas could offer to be her knight in shining armor, since that’s what he seems to imagine himself doing with Hope, and just say Zoe accepts.

Then, they would have not one, but two secrets between them. Baby Beth’s scandal, and the possible murder of Xander. It would definitely forge a bond between them, not a healthy bond by any means, but definitely one that ran deep. However, Thomas, being the self-serving jerk that he is mostof the time, might use this as a chance to have his cake and eat it too. To be married to Hope and have a fling with Zoe on the other side, it just seems like a very Thomas thing to do. However that might be a deadly move for him, seeing as Zoe is not above sending death threats or stalking! Thomas gets his just desserts? And how would the baby revelation play into this? That I can’t even begin to fathom. Stay tuned!!!