‘Days of Our Lives’ (DOOL) Spoilers: Will Proposes To Sonny As Death Around the Corner – Salem Braces For Unbearably Heartbreaking Final Moments! 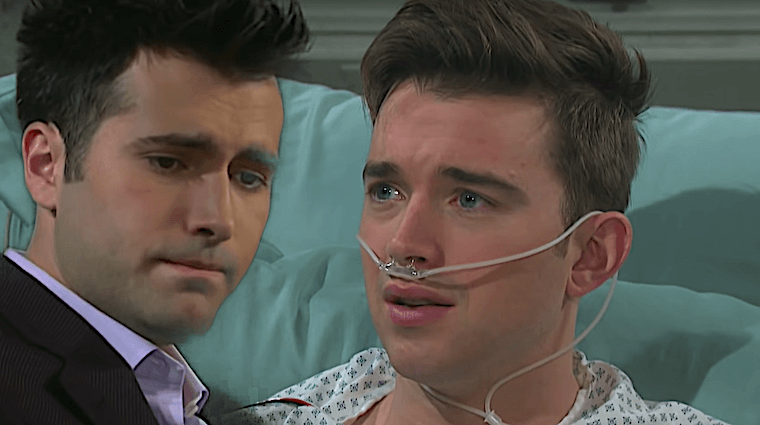 ‘Days of Our Lives’ (DOOL) Spoilers for June 10th, 2019 indicate that even though Sonny threatens Eve within an inch of her life, it won’t help matters. She doesn’t have Dr. Rolf’s diary, sooner or later he will realize this and give up, realizing that he can’t afford to lose anymore time with Will and that this is a fruitless search—at least for him.

‘Days of Our Lives’ (DOOL) Spoilers:  Will Proposes To Sonny As Death Around the Corner – Salem Braces For Unbearably Heartbreaking Final Moments!

‘DOOL’ spoilers tease that when Sonny returns though, Will is frustrated and having mood swings because he seems to think that it’s unfair that he should be dying now (it is!), because he just made his way back to him from being presumed ‘dead’ before. Ultimately though, Will is going to pack it in and stop being moody and try to make every second with his love count, and that will start by popping the question. Will finally proposes and Sonny happily accepts! Woohoo! A time for celebration! Of course, its just sad it has to be a hospital wedding. (The catering is extremely bad, I hear.)

Ben finds the Horton cabin on fire and will pick up the lighter left in Claire’s wake. Even though his fingerprints aren’t anywhere on the lighter, Eli will catch him with the lighter in a hankerchief and Ben will get arrested. Ben didn’t start the fire, but Eli catching him with the lighter certainly won’t make things look very good for him.

Meanwhile, Eli will be the one to end up saving Haley Chen and Tripp Dalton from a certain, fiery death along with his backup team. Poor Haley inhaled so much smoke that she will need CPR and a hospital stay for the damage she sustained (no word on Tripp, yet but we can only assume he wasn’t hurt as badly), and now ICE will be notified so there goes that plan!

‘Days of Our Lives’ (DOOL) Spoilers: Tripp Will Suffer

Not to mention, poor Tripp will have to suffer for helping out Haley. He will get arrested later on in the week. We can only hope that Jack Deveraux is happy. No word on JJ however, how will his son react to Haley being brought back to Salem and ultimately deported?

If someone can get their hands on Dr. Rolf’s journal soon that’d be good, maybe then we can have a nice wedding for Will and Sonny and Jack can get his memories back and start being a bearable human being again. Then again, maybe that’s too much to hope for. Stay tuned!

‘Bold and the Beautiful’ Spoilers: Flo Realizes Major Blunder, Fears Thomas Will Use Truth To Send Her To Jail!