The Young and the RestlessSpoilers

Young and The Restless Spoilers: Mia And Phyllis Are In The Hot Seat

Young and the Restless spoilers for the week beginning Monday, February 25th proves that it’s going to be a fast-paced one with plenty of twists and turns. As a matter of fact, both Mia Rosales and Phyllis Summers are put in the hot seat. Mia will try to wiggle her way out of this one by concocting a twisted lie while Phyllis has a lot of damage control that needs to be taken care of. Here’s what you need to know.

It all begins when Arturo Rosales spots Mia making a confession to Lola Rosales  in her hospital room. The night that Lola was pushed into the freezing pool outside of the Abbott cabin, she was wearing Abby’s coat. Mia assumed that it was Abby Newman at the cabin and not Lola and that’s why she attacked her.

It doesn’t take very long for Arturo to relay the news to a furious Rey Rosales, who puts his wife in hand cuffs. But before he can take her to the police station for further questioning, Mia drops a bombshell on him. She tells him that she’s pregnant with his child. Of course, no one knows if this is true, but it buy Mia sometime. At least, that’s what she is hoping for.

Next week on #YR, Arturo gives Kyle a warning, Mia gets into trouble, the Abbotts vow to take back Jabot, and Nick kicks Phyllis out. pic.twitter.com/X4yhbm0Ye3

Elsewhere, Phyllis has a lot of work ahead of her. Nick is angry that she threw Nikki, Victoria and Sharon under the bus in order to save herself. Phyllis insists that she only did it because it’s part of a bigger plan, although she doesn’t specify what that plan is. Nick accuses her of only looking out for herself. 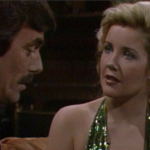 Nick isn’t the only person who is hot on Phyllis’ tail. Powerhouse attorney Christina puts Phyllis in the hot seat at court, telling her that rolling up a body in a carpet and dumping it in a park is murder. Phyllis is left stunned, as she believed that she was safe with immunity after she confessed everything that happened to Christina. It looks like Phyllis is going down with the other three ladies!

The Young and the Restless airs weekdays on the CBS network. Check your local listings for times. In the meantime, let us know what you think by leaving us a line with your thoughts in our comments section below. And as always, come back to Daily Soap Dish for all the latest news, updates and recaps on The Young and the Restless and all of your favorite daytime television shows right here.

The Young and the Restless Recap: Mia Has A Surprise For Rey

CBS ‘The Young And The Restless’ Spoilers: Will Victor Let Adam Step Back In At…