The ‘Bold and the Beautiful’ spoilers for Wednesday, October 31 indicate that Quinn is about to make a big sacrifice. Will this be enough to win back’s Eric trust?

The Bold and the Beautiful spoilers show Quinn finally coming to her senses. It might be halloween, but trick or threats is a children’s game. And we know that B&B’s fashion elite aren’t into children games. Quinn (Rena Sofer) finally comes to her senses an does the right thing. Don’t be fooled by her witch costume, she will act like anything but! But the irony is still palpable…

‘Bold and the Beautiful’ spoilers – Quinn To Earn Eric’s Trust?

Now that Quinn is finally coming around, this could have an effect on Eric (John McCook). Will Eric forgive her and can they make amends? B&B spoilers suggest that even with Quinn’s change in behaviour, it might just not be enough. The problems between them might just be too great to overcome right now. But at least Quinn is trying.

“Tomorrow Pam reflects back on moments with Stephanie and their mother, Ann to Charlie. Don’t miss flashbacks with Betty White and Susan Flannery on the next episode of The Bold and the Beautiful.”

Here is Betty White and Susan Flannery together on B&B: 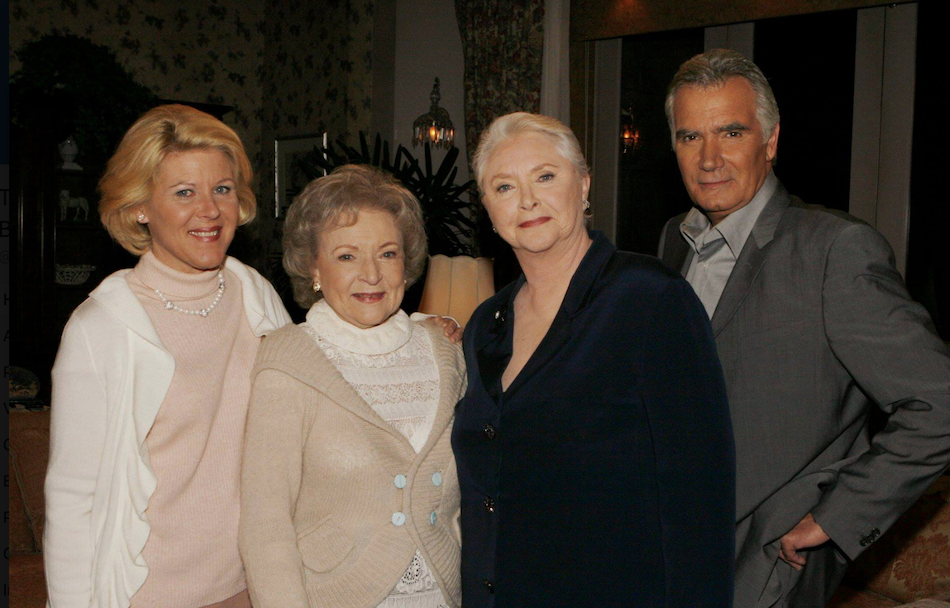 Bill might have woken up a “changed man” but nothing seem to have changed. Ridge is furious that Bill keeps trying to court Brooke. His anger reaches boiling point he destroys a sentimental piece given by Bill to Brooke. The more things change the more they remain the same, don’t they?

‘Bold and the Beautiful’ spoilers point to a not-so-happy merry-go-lucky Halloween after all. Happy Halloween! Isn’t this supposed to a day of easy-going fun? Not on B&B, no senor.

‘Bold and the Beatiful’ spoilers for Thursday, November 1 – Bill and Ridge At Each Other’s Throats

Bill and Ridge just can’t get along. These two hate each other like poison, and the tension will continue on Thursday, November 1. Ridge just starts boiling with rage, and even reaches out to find the Spencer CEO sword! He unleashes his fury in a pretty petty and childish way, though.

“Ridge is shocked when Bill makes an unexpected statement to Detective Sanchez about the fight that landed him in the hospital. WATCH FULL EPISODE: http://bit.ly/2SCuzfQ  #BoldandBeautiful”

Ridge is shocked when Bill makes an unexpected statement to Detective Sanchez about the fight that landed him in the hospital. WATCH FULL EPISODE: https://t.co/tyRQJaOQ1K #BoldandBeautiful pic.twitter.com/ylNqKjmZMA

B&B spoilers suggest that Justin tells Bill that he found the judge and that he might have some very important information. In other B&B news, Quinn tells inWyatt that she feels as though someone’s trying to ruin her marriage.

Wayne Brady also recently announced that he was joining the cast of B&B. Some exciting times up ahead as we head into November sweeps for fans of B&B.

Daily Soap Dish is a leading source for all Bold and the Beautiful spoilers, news and more. Check back frequently with our B&B page for our up-to-the-minute dish on your favourite soap. Give us a like on Facebook to continue the conversation with likeminded B&B and enthusiasts, and give us a follow on Twitter.