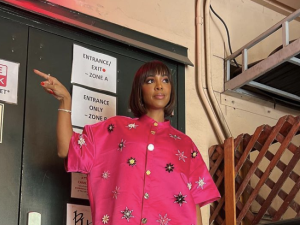 Kelly Rowland has doubled down on her support for singer Chris Brown.

In a message to her 81 million followers on Instagram, the star voiced her support for Brown, insisting that his detractors should show ‘grace’ and ‘forgiveness’ to him. In an interview with TMZ, she said: “Before we point fingers at anyone, we should realise how grateful we are for every moment we have, even for our own problems.

“It is important to remember to be human. We are humans.” These comments arrived on the back end of Brown being booed amid the American Music Awards. Prior to that process, Brown was very vocal about his frustrations at seeing his tribute performance for Michael Jackson being cancelled at the AMAs.

But during the ceremony, Kelly showed her support for Brown, as he won the AMA for Favourite Male R&B Artist. This is despite the fact that Brown was booed extensively at that moment.

In some prior comments at the time, she remarked: “Please, calm down. I’d like to take this prize [and] give it to Chris. Thank you for producing fantastic R&B songs. I love you. Congratulations to all the nominees in this category, and congratulations to you.”

The fans on social media had a lot to say about the matter. A certain subset of people felt that Kelly had a lot of courage in defending Chris since she was taking on a hostile crowd. After all, Kelly did risk her reputation. Meanwhile, others argued that Kelly deserved to be subjected to criticism.

One person wrote: “People will demonise a person as if they can never learn, change, or grow,” while another person stated: “It makes me proud that the crowd booed after Kelly Rowland defended Chris Brown.”

It is fair to say that Kelly will continue to do what she thinks is best regardless of what others say. So there you have it folks. What did you think about this? Let us know your thoughts in the comments section below.