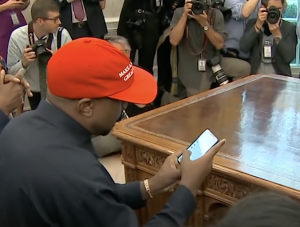 Kanye West had allegedly shown explicit pictures of his ex Kim Kardashian to his former employees.

According to the Rolling Stone, a former employee has claimed that Kanye had shown him a racy picture of Kim in 2018 during the course of a job interview. And as part of that process, it is alleged that Kanye showed a ‘revealing photo.’

This was not the only incident as there were further claims that another employee recalled Kanye showing a video about Kim that was explicit to the creative team at Yeezy. It is not exactly clear what led Kanye to do this, but based on his other conduct, it may have been due to the following reasons.

Secondly, the former employees also argued that this was a way for Kanye to exert control and show that he could do what he wanted. The following comments confirmed as much: “I feel it was a tactic to break a person down and establish their unwavering allegiance to him, testing and destroying people’s boundaries.”

The fans on social media, however, had a different take on the matter. A significant proportion of the fanbase did not necessarily direct blame towards Kanye, but shone spotlight on Kim.

This was on the basis that she had developed a reputation for sharing explicit images on the internet anyway. One person wrote: “Explicit pics of Kim Kardashian are shown to anyone with a web browser and an internet connection.”

Time will tell if Kanye does respond to this, but based on what we have seen so far, things are not looking good. So there you have it folks. What did you think about this? Let us know your thoughts in the comments section below.