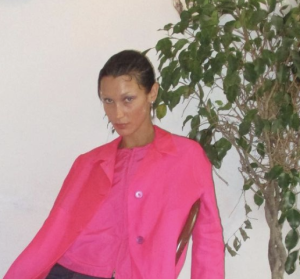 Supermodel Bella Hadid is disassociating herself from fashion giant Balenciaga.

The brand’s latest ad campaign, which featured children holding stuffed animals that appear to be wearing bondage-inspired outfits, has come under fire. And in line with that, one user noticed a summary of a US Supreme Court decision concerning the law on child pornography being placed in the advert.

This was in and amongst an image of a child holding a stuffed toy. In response, Hadid, 26, apparently deleted the picture. Despite that being the case, the fans on social media had a lot to say. A significant proportion of the fanbase bashed Bella for even associating with the company in the first place.

Meanwhile, others called out her hypocrisy since she had removed the photo but had not issued a public statement of condemnation. One person wrote: “Can’t believe these celebrities have no care for the children at all! You work with a label that have sexually exploited children in their ad campaigns!

“But because the people spoke up they’ve apologised [sic] … they wouldn’t have otherwise and you puppets are ok with it all?!,” while another person stated: “Please address the unethical aspects of this campaign it’s a f disgrace and you shouldn’t be associated with that muck.”

It is not surprising, then, that the brand decided to take immediate action. As of now, they have removed all the social media posts in light of the backlash. And now that the dust has settled, the company was seeking to dampen down the flames of discontent.

In an official statement on behalf of the company, a representative said the following: “We apologize for displaying unsettling documents in our campaign. We take this matter very seriously.”

This is a massive blender by Balenciaga, and who knows whether there will be any further ramifications. Time will tell how it all plays out. So there you have it folks. What did you think about this? Let us know your thoughts in the comments section below.