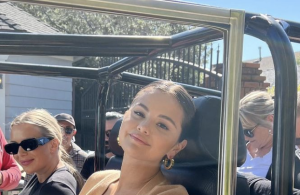 Selena Gomez spoke about the importance of being kind amid Hailey Bieber’s recent interview.

Hailey, for her part, got very candid about a variety of topics which included the dynamics between herself, Selena and Justin Bieber. And as part of that process, the talk turned to whether Hailey had allegedly been with Justin when he was with Selena. After all, shortly after Selena and Justin broke up, Hailey got with him.

With that being said, Selena spoke about the importance of choosing words carefully since many people had a lot to say about the whole matter. In a post to her fans, she said: “It’s incredibly ironic that I would release something that’s all about kind words ’cause that’s exactly what I want…Words matter.”

And kindness is something that seems to be present between Hailey, Selena and Justin. Hailey expanded on how she does not have any problems with Selena by suggesting that she had spoken to her since her marriage with Justin. Not only that, but Selena is someone that Hailey does respect.

After all, they are near the same age and have managed to become successful women in their own right. Hailey’s following comments confirmed as much: “It’s all respect. It’s all love. She doesn’t owe me anything.

“Neither of us owe anybody anything except respect. I respect her a lot, and I think there are no expectations [between us]. I respect her.” The fans on social media praised Selena for the manner in which she conducted herself.

They were of the view that Selena had gotten over Justin a long time ago. Therefore, her fans needed to take the same approach. One person wrote: “Selena Gomez is so kind!! And someone else is trending another day just because of using Selena’s name.

“And provoking hateful comments about Sel and her fans one again. Its sad!” Hopefully, moving forward, this is the end of the Selena, Justin and Hailey drama. So there you have it folks. What did you think about this?