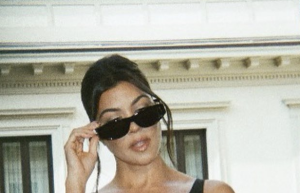 Kourtney Kardashian opened up on her IVF experience with her husband Travis Barker.

The Kardashian has made it very clear that she is looking to start a family with Travis now that they have gotten married. And as part of that process, they resorted to IVF since Kourtney was struggling to conceive.

She has spoken previously about potentially having her eggs frozen, as well as having apparently had menopausal symptoms. So when Kourtney resorted to IVF, things were not made any easier.

In an interview on the “Not Skinny But Not Fat” podcast, Kourtney felt she rushed into getting IVF. She said: “If you even look anything up online about things you can do to help get pregnant.

“It says on there, like, ‘If you’re over 40’ — or it might even say something younger — it says, ‘Go right away. So I felt a little bit pushed.” With that being said, Kourtney admitted that she has now decided to stop IVF. Instead, the couple have resorted to doing things naturally.

In some prior comments at the time, Kourtney remarked: “He [doctor] told us, well, he told me, that the thing that would help it was drinking [Travis’] come, like, four times a week.” Nevertheless, there is always the possibility that Kourtney may not get pregnant.

And if that is the case, there are always other avenues that the couple can consider. In addition, even if they decide to let their wish of having children go, the pair do have their own kids. Kourtney, for her part, has three kids with her ex Scott Disick. Meanwhile, Travis has children with his ex Shanna Moakler.

Time will tell if Kourtney and Travis can be successful in their attempts. So there you have it folks. What did you think about this? Let us know your thoughts in the comments section below.